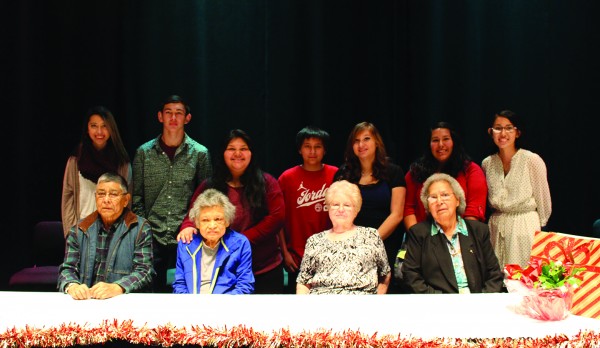 The elder’s life experiences and valuable advice was graciously accepted by an eager and anxious gathering.  The young people displayed tremendous respect as they sat quietly and listened in earnest to the wisdom of Marvin “Skilly” French, Annie Laura Jumper, Margaret Green McCall, and Katherine Norlen Panther.

Marvin Ballard “Skilly” French was born at the “old Indian Hospital” in 1940 to Merony and Viola French of the Big Cove Community.  Skilly’s family did not have indoor plumbing or electricity until the early 1950’s.  He attended Big Cove Day School through 7th grade and graduated 12th Grade where he competed in football, baseball, and basketball.  He also participated in summer softball and stickball.  Skilly stated that “. . . the best athletes in Cherokee were Hog Johnson, Ed Taylor, Vernon Hornbuckle, and Robert Wahnetah.”

Skilly took a Mechanics Shop in high school that helped him in many ways.  He enlisted in the Navy for a time.  Then, he returned home where he was employed with the EMS for 25 years and the Police Dispatch for five years.

Today, Skilly enjoys fishing, “loafing around,” and talking with friends and family.  He also watches sports and shows on TV.  He likes early Rock and Roll and traditional Country music.

Skilly believes a big issue concerning Cherokee people is diabetes and closes with this bit of advice to our young people.  “Take care of your health and diet.  You may get by eating junk food for 10-15 years, but eventually it will bring about all kinds of health problems, even death.”

Annie Laura Jumper was born in Whittier on June 2, 1938.  She was born at home to her mother, Ollie Jumper, on the 3200 Acre Tract in the Birdtown Community.  She learned to cook by the time she was 8-years-old.  Her family had a wood stove and large black pots and pans.  She lived in a log home that had a floor, but there were large cracks in the floor.  She later attended the Cherokee Boarding Schools, but lamented that the school took away a lot of Cherokee cultures and traditions like songs, dances, and language.  After the 10th Grade, she attended the Swain Schools.

Annie met Russell Walkingstick Sr., a good-looking and nice man, at the Boiling Springs Baptist Church and it was “love at first sight!”  They were later married by Russell Clifford Hornbuckle.  Annie and Russell had seven children.  She gave birth to one child at home by herself.

Annie worked at The Cherokees, Cooper’s Motel, Ponderosa Restaurant, the Mill in Bryson City, and the Mountainside Theater (the Drama.)  Russell worked at the Oconaluftee Indian Village for many years as a Guide, Maintenance Man, and Craftsman.  She was very proud of the fact that he was also an Ambassador and traveled to Paris, France on behalf of the Tribe. 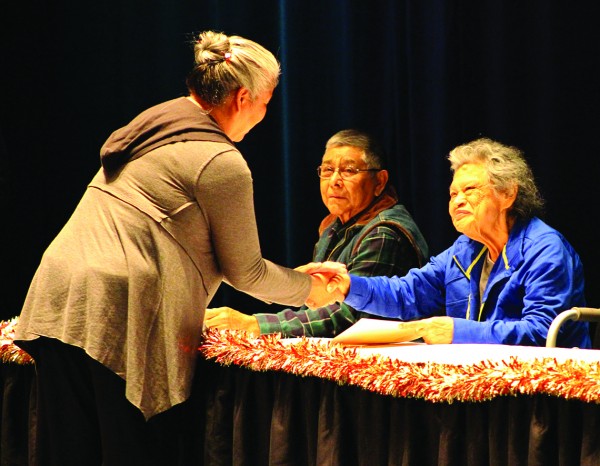 Annie feels drugs and addiction are a problem here on the Qualla Boundary and would like to offer this advice to the young people.  “Stay away from drugs!”

Margaret Green McCall was born in the Cowee Community of Macon County on May 24, 1943, to Jonas Green and Flora May Wikle.  She has one sister and four brothers.  Margaret grew up in an old two-story house with no running water and had to carry it from an outdoor spring.  However, they did have electricity.  She attended Cowee Elementary, East Franklin, and Franklin High School.

Margaret met James Cornell McCall and she knew that “. . . he was the one for me!”  They married soon after in Walhalla, SC.   She resides in Camp Creek, Whittier, where her husband “happily” traded some labor for property.

Margaret worked at the Vassar Plant and Hungry Bear Restaurant.  Today, she enjoys eating various foods and watching her favorite shows on TV as well as listening to Country Rock music.  At this time of year, she appreciates Christmas music.

Her advice to youth today is, “Try not to grow up too fast!  Enjoy being young!”

Katherine Norlen Panther was born on March 28, 1938 at the “old Indian Hospital.”  Her parents are Emmaline Driver and Samuel Panther.  Her Cherokee name is Ke-la-di, which means “Belonging Somewhere.”  She has a very large family of full- and half-brothers and sisters.  She has lived her entire life in Big Cove where she attended Big Cove Day School and then went to the Day School.  Her favorite classes were basketry and weaving where she was honored to be taught by Lottie Stamper and Ms. Garnett.

Katherine lived in a log house that had only two rooms, a living room and a kitchen.  The living room contained three beds where they all slept.  They had no electricity so for baths, they would heat water in a big tub and take turns bathing.  They got electricity in the 1950s and running water came later.  They had a big farm and raised pigs, horses, ducks, cows, and chickens.  They would slaughter a hog for winter.  Her dad would “hang” it, and then they would go and cut whatever they needed at the time.  They also ate squirrels, rabbits, and fish.  Katherine wore dresses her mom made for her.  The girls each had one or two dresses.  Most were “hand me downs.”

Katherine tries to stay busy.  She only watches one show on TV along with the news.  She also enjoys listening to music.  She feels a lot of problems are related to drugs so her advice to young people is simple, “Do not do the things you are not supposed to be doing!”

Vice Chief Richard “Richie” Sneed provided the prayer to help open the Honor the Elders event while the Cherokee High School JROTC presented the posting and retiring of the Colors.  The Cherokee Singers performed the Pledge of Allegiance and America which was followed by the Warrior Dance presented by Esaih Postoak.  Robert Running Wolfe provided some contemporary musical entertainment that was enjoyed by all.  Vice-Chief Sneed, Painttown Rep. Marie Junaluska, and Cherokee Royalty presented certificates and gifts to each Elder.  Cherokee High School Principal Debra Foerst completed the event with closing comments.