BASKETBALL: McMillan leads Braves in close one over Rockets 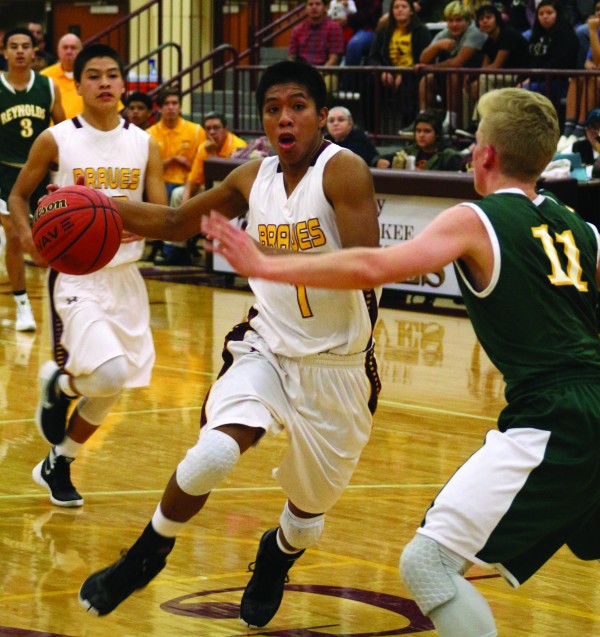 “We played great offense, but played terrible defense,” said Willis Tullos, Braves head coach.  “They shot the ball really, really well.  It’s just one of those nights where both teams were shooting the ball well and whoever got the shots at the end was going to win.”

He added, “If we don’t make threes, we don’t do well.  We’re not big enough to play an inside game.  So, we have to shoot threes, and I think we shot threes tonight very well.  I think Justus (Day) and Jason (McMillan) shot really well and made some big free throws when they needed to.  It’s a whole team effort.”

Both teams came out shooting the ball well, and the Rockets held a small 12-8 lead at the 4:16 mark of the first period.  Both teams kept plugging, and the Rockets led 22-19 with 2:06 left in the first when Justus Day hit a three-point shot to tie the game.  Day finished the night with 22 points.

The Rockets hit a few shots at the end of the first and led 28-25 after one period.

Both teams scored five points in the first two minutes of the second period, and the Rockets led 33-30.  Cherokee got its first lead of the game at the 5:14 mark of the second as McMillan hit a short jumper to put the Braves up by one at 34-33.  The Braves kept the pressure on and ended up taking a 48-41 lead into the locker room.

The Rockets came out of the locker room hitting shot after shot and outscored Cherokee 10-4 in the first three minutes to get within one at 52-51.  Both teams hit a few shots, and the game was tied at 55-55 with 3:35 left in the third period.  Forty-five seconds later, McMillan went on a five-point tear hitting a three-pointer followed by a short jump shot to put the Braves up 62-57 at the 2:23 mark.

That sparked the Braves who then went on an 8-0 tear of their own to lead 81-77 with 3:33 left.  Day scored seven points in the final minutes including a four-point play after being fouled on a three-point shot.  He and Holden Straughan both hit key free throws in the final minute as Cherokee was able to hold off the Rockets by the final score of 92-89.

The Braves hit the boards well in this game and were led by Cory Junaluska with 12 and Logan Teesateskie with 5.

To view or purchase photos from this game, visit: https://onefeather.smugmug.com/SPORTS/BASKETBALL/BRAVES-BASKETBALL-201516/Vs-AC-Reynolds-December-7/