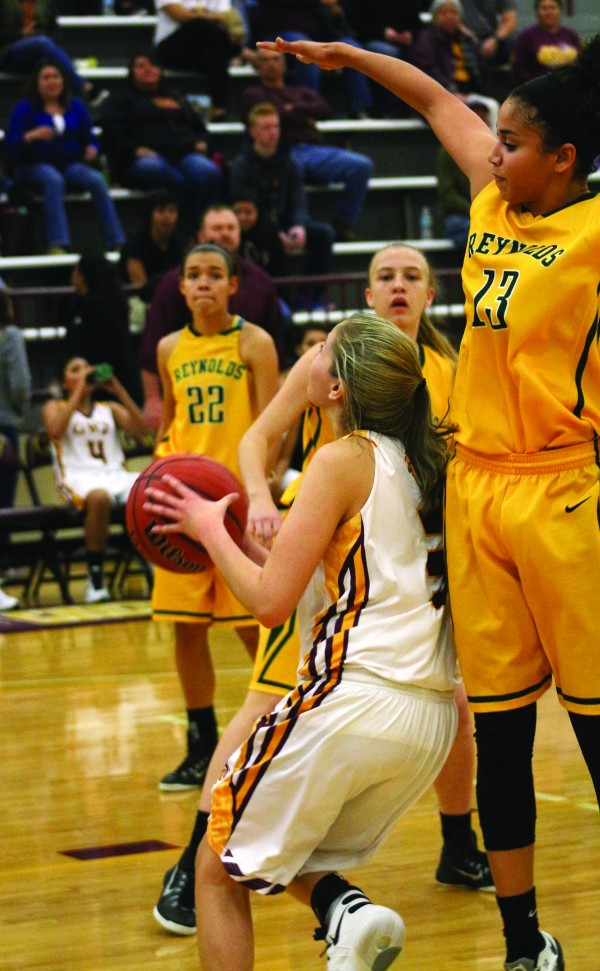 It took four regular periods and two overtime periods for the Lady Braves to decide their home game against the A.C. Reynolds Lady Rockets on Monday, Dec. 7.  The Lady Rockets edged Cherokee in the second overtime to come away with a 63-60 win.

“I thought we came out flat in the first half,” said Chris Mintz, Lady Braves head coach.  “But, we picked up our intensity in the second half and got a nice lead.  Overtime was just back and forth.”

Coach Mintz added, “We’ve got to get better at end-of-game situations.  We have to finish game.  That’s two games that we’ve let get away that we should have won.”

Both teams started slowly, and the game was tied at 7-7 midway through the first period.  The Lady Rockets edged ahead in the final minute and led 17-11 after the first.

The teams swapped the first few baskets of the second period, and A.C. Reynolds led 21-14 two minutes in.  Cherokee came back though, and Bree Stamper, Lady Braves senior, hit a three-point shot with 3:04 left before the half to tie the game at 23-23.  The Lady Braves kept the pressure on and took a 28-27 lead into the locker room.

Cherokee suffered a setback early in the third period as Pooh King, Lady Braves point guard, got her fourth personal foul at the 6:54 mark and ended up sitting the entire period.

The Lady Braves seemed unphased though and outscored A.C. Reynolds 12-8 in the third to take a 40-35 lead into the fourth quarter. 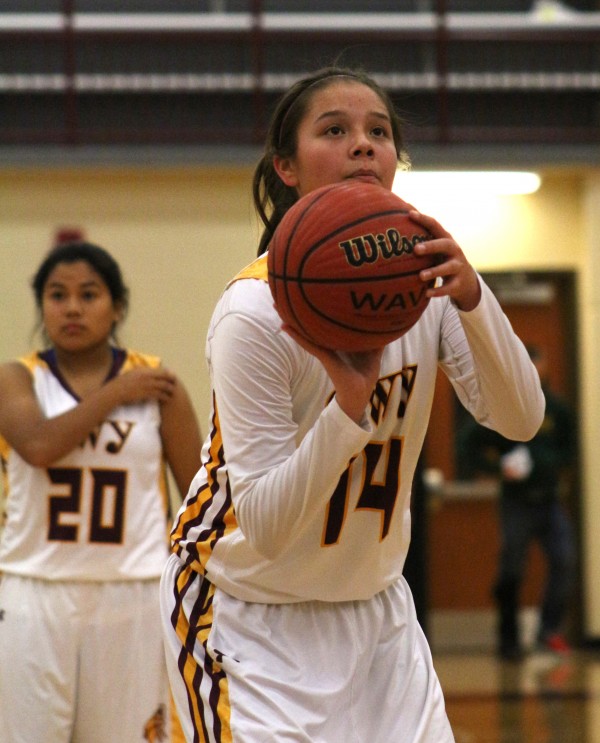 Cherokee’s Shelby Wolfe lines up for a free throw. She led the Lady Braves with 18 points on the night.

The Lady Rockets kept plugging and tied the game at 46-46 with 2:26 left.  About a minute later, Tori Teesateskie, Lady Braves freshman, passed to King inside the paint who hit a bank shot from about three feet out to give Cherokee a 48-46 lead with 1:34 left.

Lady Rocket’s Dani Sweeney hit two free throws at the 1:13 mark to tie the game.  Two possessions later and with time running out on the game, an A.C. Reynolds player missed a shot that bounced hard off the rim into the hands of King.  She drove down the court and shot from about 10 feet out as time expired.  The ball bounced off the rim, and the game went to overtime tied at 48-48.

Cherokee’s Shelby Wolfe, who led Cherokee with 18 points on the night, scored the first four points in overtime on a short lay-up and two free throws to give the Lady Braves a 52-48 lead at the 2:31 mark in the first overtime.

The Lady Rockets came right back and tied the game at 52-52.  Neither team scored again, and the game went to a second overtime period.

A.C. Reynolds’ Ashlyn Perkins scored on a layup just seconds in to put the Lady Rockets up 54-52.  Wolfe answered quickly with a traditional three-point play just 12 seconds later to put Cherokee up 55-52 at the 3:35 mark.

The Lady Rockets hit two buckets in a row to take a 59-55 lead at the 2:31 mark, and Cherokee’s Bree Jumper responded by driving the base line for two points to make it 59-57 with just over a minute left in the game.

A.C. Reynolds’ Shar’e Harrison added a free throw with :47 seconds left to give the Lady Rockets a three-point 60-57 lead.

Cherokee kept plugging and Carla Wolfe found a hole on the right side of the Lady Rockets defense and drilled a three-point shot from the far side to tie the game with 32 seconds left.

Lady Rocket’s Sarah Swicegood hit two free throws on the next trip down the court and another with 1.5 seconds on the clock to give A.C Reynolds the three-point 63-60 win.

To view or purchase photos from this game, visit: https://onefeather.smugmug.com/SPORTS/BASKETBALL/LADY-BRAVES-BASKETBALL-201516/Vs-AC-Reynolds-December-7/i-HjV3QkD