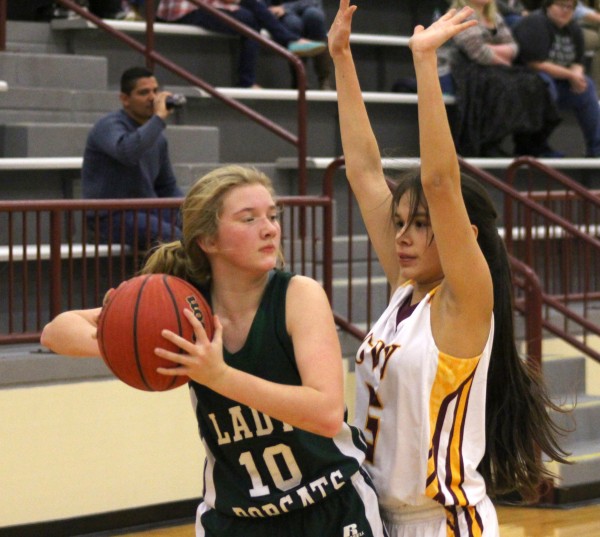 Cherokee’s LeLe Lossiah (#5) plays tough defense against Blue Ridge’s Jade Bryson (#10) during the home opener for the Lady Braves on Friday, Dec. 4. Lossiah led Cherokee with 16 points as they went on to a big 66-6 win. (SCOTT MCKIE B.P./One Feather photos)

LeLe Lossiah, Lady Braves senior, scored ten more points than the entire Blue Ridge (3-1) team as Cherokee (2-1) won their home opener.  Lossiah led the Lady Braves with 16 points on the night as the Lady Braves ran away with it 66-6 against the previously unbeaten Lady Bobcats.

“When you play someone that’s a little bit below you, it’s nice to come out and actually play good against them,” said Chris Mintz, Lady Braves head coach.  “Sometimes, you can come out and play sloppy…we played really good early.  We got our lead and sort of coasted from there.” 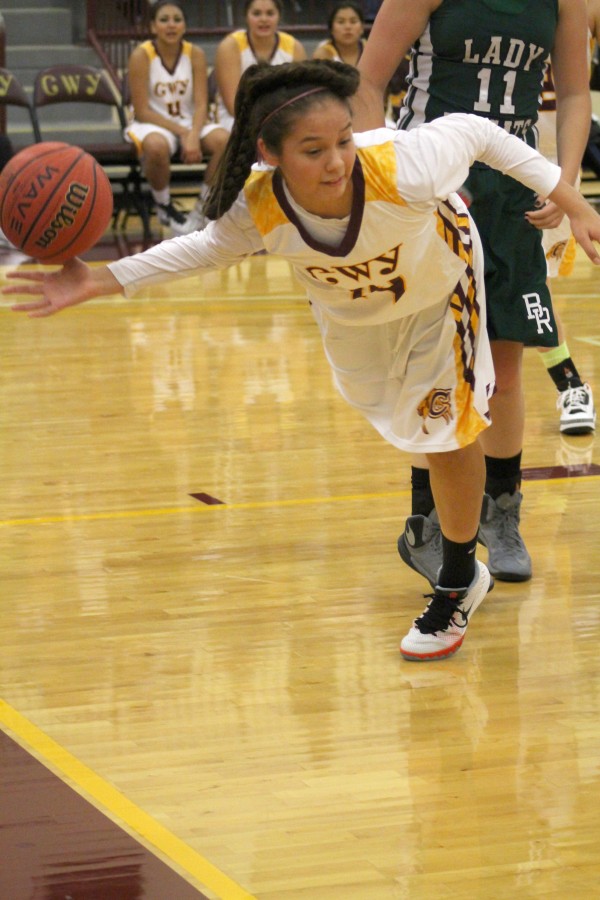 Cherokee’s Shelby Wolfe (#14) hustles to save a ball going out-of-bounds. On the night, she had 5 points.

The game actually had a slow start, and after three minutes Cherokee led 4-2.  But, the Lady Braves’ press defense began to really take its toll and at the 3:35 mark of the first period, Cherokee had extended its lead to 13-2.  When the buzzer sounded to end the first, the Lady Braves were up 28-2.

Cherokee kept the pressure up on the defensive side and continued to shoot the ball well in the second period.  At the 4:37 mark, Lossiah stole the ball at the Blue Ridge baseline and quickly put it back up for 2 of her 16 points.  With that score, the Lady Braves led by 40 points (42-2) invoking the NCHSAA mercy rule, and the clock ran continuously for the remainder of the contest.

With the clock running, the second half flew by, and Cherokee led 53-3 after the third and went on to take the huge 66-6 win.

To view or purchase photos from this game, visit: https://onefeather.smugmug.com/SPORTS/BASKETBALL/LADY-BRAVES-BASKETBALL-201516/Vs-Blue-Ridge-December-4/