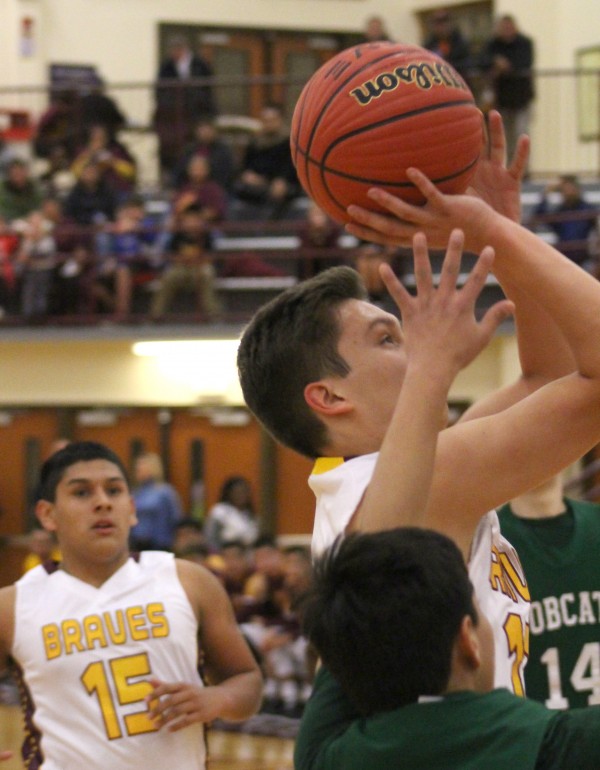 Cherokee’s Steven Straughan goes up in traffic for a shot in the first half of Friday’s home against Blue Ridge. On the night, he had 15 points as Cherokee won 94-38 over the Bobcats. (SCOTT MCKIE B.P./One Feather photos)

Cherokee (2-1) almost tripled Blue Ridge’s (2-2) output as the Braves won their home opener 94-38 on Friday, Dec. 4.  Led by Jason McMillan with 18 points, Cherokee shot 51 percent from the floor and 38 percent from the three-point line.  Brothers Steven Straughan and Holden Straughan each had 15 points on the night.

“I think we played well,” said Willis Tullos, Braves head coach.  “We came out and played with a lot more intensity than we did on Tuesday night.  We were flat Tuesday night, but we had some intensity and we got up and down the floor tonight.  We played the way we normally should play.” 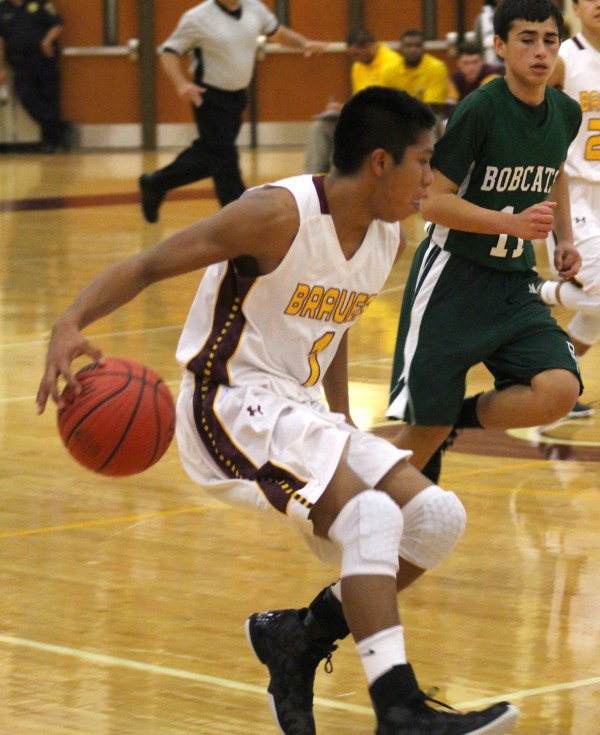 Jason McMillan (#1), Braves senior, puts the brakes on and dribbles behind his back as he avoids Blue Ridge defender Dylan McCall (#11). He led Cherokee with 18 points and 3 steals.

The Braves had 10 steals on the night including three from McMillan and one each from Justus Day, Tye Mintz, Trace Lambert, Steven Straughan, Kennan Panther, Holden Straughan and Josiah Lossiah.

The first two minutes were a little slow for both teams with the Braves taking an early 6-2 lead.  But, Cherokee began to pull away due to their defensive efforts and took a 23-6 lead at the 2:06 mark in the first period and led 37-8 after the first.

The Braves kept the pressure up and led 44-9 two minutes into the second period.  The Bobcats came back some and Cherokee took a 67-30 lead into the locker room.

At the 7:36 mark of the third period, Holden Straughan stole the ball and scored on a quick lay-up to give the Braves a 40-point lead (71-30) thereby invoking the NCHSSA mercy rule, and the clock ran continuously for the remainder of the contest.  Cherokee led 83-31 at the end of the third and went on to take the big 94-38 win.

Blue Ridge was led by Hunter Stewart with 17 points followed by Ben Riddle with 9.

To view or purchase photos from this game, visit: https://onefeather.smugmug.com/SPORTS/BASKETBALL/BRAVES-BASKETBALL-201516/Vs-Blue-Ridge-December-4/i-vkk8Hj3