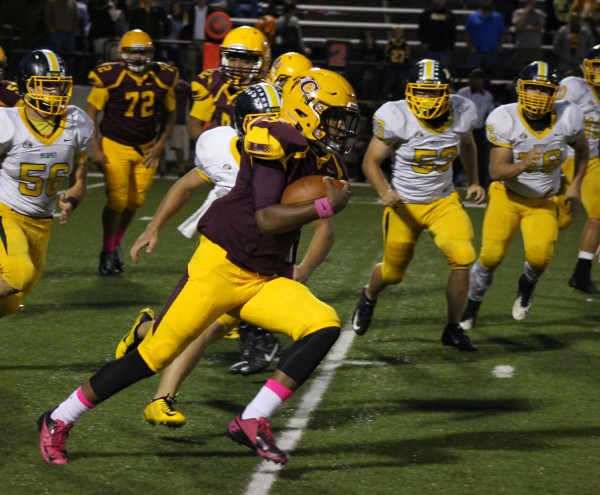 It was a tale of two halves as the Cherokee Braves (3-3) hosted the Murphy Bulldogs (5-1) at Ray Kinsland Stadium on Friday, Sept. 25.  The Braves played good defense, survived several turnovers, and took a 6-0 lead into the locker room at halftime, but Murphy came back in the second half and put up 27 points to take a 27-6 win.

“We matched up with them and had opportunities early that we didn’t take advantage of,” said Kent Briggs, Braves head coach.  “The defense played very well.  They played their hearts out.  I’m very proud of our effort.  We went out there and played with the belief that we can win.”

“We just had some turnovers,” Briggs added.  “And, anytime you have turnovers, it’s very costly and was probably the difference in the game, but at the same time, we have learned that there’s no team that we can’t play with.”

After starting on their own 46-yard line following the opening kickoff, Cherokee fumbled the ball on second down, giving Murphy the ball at the Bulldogs 43.

Cherokee’s defense held strong though and forced a punt.

The Braves took over on their own 16-yard line and put together a nice drive.  On a steady diet of running Isaiah Evans, Braves freshman running back, combined with short pass plays from Tye Mintz, Braves sophomore quarterback, Cherokee moved down the field.

The drive itself took up eight minutes of the first quarter and spanned 22 plays.  The Braves drove inside the 10-yard line, but they couldn’t punch it in the turned the ball over on downs at the Murphy 3-yard line.

Murphy was able to move the ball down the field and into Braves territory, but their drive stalled at the Cherokee 27-yard line as they would turn it over on downs as well.

Both teams punted on their next possessions.

Following a Murphy punt, Cherokee set up shop at their own 30-yard line with just less than a minute to go in the half.  Following a holding penalty on Cherokee, they started again with a 1st and 16 from the 24-yard line.  Mintz hit Straughan, sophomore wide receiver, on a 14-yard gain to the 38-yard line.  Mintz kept the ball for a short gain on second down, and then Kennan Panther, senior fullback, ran four yards for the first down to the keep the drive alive on third and short.

Mintz completed passes on the next two plays – one to Straughan for a 15-yard gain and one to Evans for a 16-yard gain.  Several plays later, while scrambling to his right, Mintz found McMillan wide open down the right side for a 26-yard touchdown pass with 3.3 seconds left in the half.  The two-point attempt failed and Cherokee took a 6-0 lead into the locker room.

Murphy took the opening kickoff in the second half, and in nine plays, took the lead as Dalton Kent hit Anthony Connors on a 37-yard touchdown pass.  Joey Dalton added the extra point and Murphy led 7-6 with 7:40 left in the third.

Following a Braves fumble, the Bulldogs started at their own 38-yard line.  They drove down inside Cherokee territory to the 18-yard line in a few plays, but their drive ended as Luke Woodard, Braves junior safety, intercepted the ball in the end zone.

Cherokee punted after a three-and-out on their next possession, and Murphy got the ball on its own 41-yard line.  On first down, Kadrian McRae ran 58 yards down to the Cherokee 1-yard line.  On the next play, Kent kept the ball for the score to make it 14-6 with 48 seconds left in the third quarter.  McRae finished the night with 19 carries for 195 yards.

Murphy scored two more times in the fourth quarter on another 1-yard run by Kent and another 37-yard touchdown pass from Kent to Connors.

Cherokee has a bye week coming up before they travel to Swain on Friday, Oct. 9.

Coach Briggs welcomes the break and said they will be preparing for the Maroon Devils.  “We’ll get ready for Swain, and we’ll also try to get a little healthy, get some rest and try to get ourselves back on track.  We just have to keep working to get better.”

To view or purchase photos from this game, visit: https://onefeather.smugmug.com/SPORTS/FOOTBALL/BRAVES-FOOTBALL-2015/Vs-Murphy-September-25