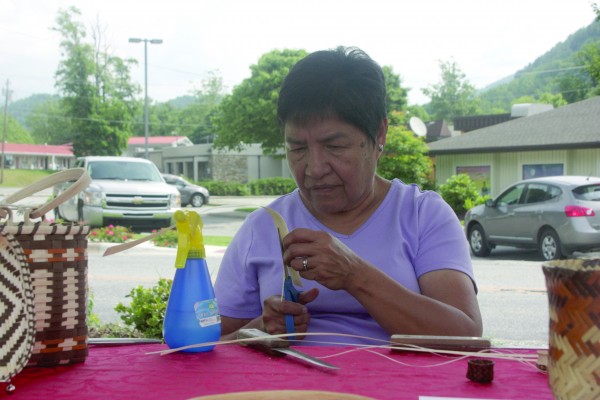 Louise Goings, shown working on a basket at a past Cherokee Voices Festival, has been chosen, along with her husband Butch, to receive the Community Traditions Award from the North Carolina Folklore Society. (SCOTT MCKIE B.P./One Feather)

CULLOWHEE –  The North Carolina Folklore Society announced the 2015 recipients of its annual awards: The Community Traditions Award, and The Brown-Hudson Award on Wednesday, Sept. 23.  The Community Traditions Award honors  organizations and groups who engage in or support folklife and traditional culture in North Carolina, and The Brown-Hudson Award recognizes persons who have in special ways contributed to the appreciation, continuation, or study of North Carolina folk traditions.

Louise Goings is a versatile basket weaver. With the guidance of her mother, Emma Taylor, herself an award winning weaver of Cherokee baskets, Louise  started weaving baskets at the age of 10.  Her mastery of the craft has taken her to the Festival of American Folklife at the Smithsonian Institute and the Natural History Museum of the Smithsonian where she’s demonstrated her process. In the early 1960s, she was accepted as a member of the Qualla Arts and Crafts Mutual artisan guild. In 1992, she and her husband George were invited to Washington DC for President Clinton’s inaugural celebration of southern craft, where they were honored with other southern craftsmen and women. She’s also an active member of the community and regularly demonstrates basket making in schools, at Western Carolina University, at the Mountain Heritage Day festival, and at the Cherokee Voices Festival.

George “Butch” Goings, a talented woodcarver, was born on Owl Branch in the Yellowhill community of the Qualla boundary. As a high school student, he learned to carve animal figures in both wood and stone under the tutelage of Amanda Crowe. He works with alabaster, pipestone and soapstone, as well as walnut, cherry, buckeye and holly. He is a member of the Qualla Arts and Crafts Mutual, has demonstrated at the North Carolina State Fair and on the PBS series The Woodwright’s Shop. George Goings also teaches woodworking classes and has served on the Qualla Arts and Crafts board of directors.

Tom Belt is among those set to receive the Brown-Hudson Folklore Award.  A Cherokee language instructor at Western Carolina University and a Cherokee Nation citizen, Belt was chosen for his dedication to Cherokee language revitalization through advocacy, teaching, and grassroots organizing.

Belt believes language is integral to group identity and that it carries cultural perspective and cultural thought essential for a group to understand and express its past, present and future.  In addition to his work at the university, he also works with students at the New Kituwah Academy as well as being a member of the Cherokee Language Consortium.

The award ceremony is scheduled for Saturday, Oct. 10 at the N.C. Center for the Advance of Teaching in Cullowhee.  The ceremony will take place at 2:30pm with a reception to follow.  The event is open to the public.