CIPD Officer given the Patriot Award 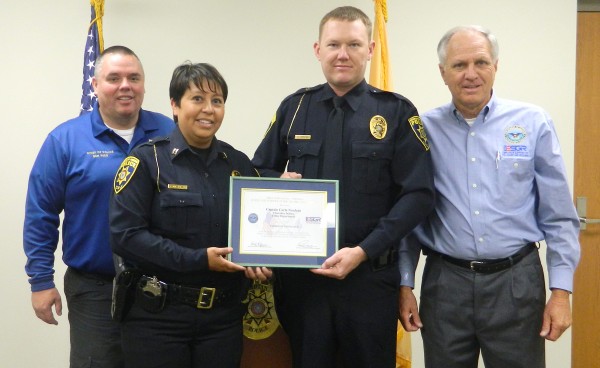 Employer Support of the Guard and Reserve (ESGR) volunteer, Pete Haithcock presented the Patriot Award to Captain Carla Neadeau of the Cherokee Indian Police Department on Wednesday, Sept. 23.  Captain Neadeau was nominated by her employee, Travis L Brooks.  Captain Neadeau provided support to Travis and his family while serving in Afghanistan.

Cherokee Chief of Police Ben Reed said, “I thank the Lord for our United States military. I am thankful for all of those who have served, those still serving, and those who will serve in the US Armed Forces. This award is to recognize our agency’s support of military personnel, but our effort is certainly small compared to the service of our military personnel. Thank you and God bless.”

Sgt. Brooks serves with the 210th Military Police Co., National Guard. During his 12 month tour in Afghanistan, Patrolman Brooks was continually supported by the Cherokee Indian Police Department and on his return to work, Chief of Police Reed and the administrative staff ensures that he accumulates leave, retains seniority, and promotion opportunities in the department. Chief Reed signed a Statement of Support to be displayed at the Cherokee Indian Police Department.

ESGR, a Department of Defense office, was established in 1972 to promote cooperation and understanding between Reserve Component Service members and their civilian employers and to assist in the resolution of conflicts arising from an employee’s military commitment. Together with Headquarters ESGR staff and a small cadre of support staff for each State Committee, volunteers work to promote and enhance employer support for military service in the Guard and Reserve.