ON THE SIDELINES: Hey fans, keep on screaming

The late Larry Munson, legendary Georgia Bulldogs radio announcer, was famous for his high-energy radio calls.  After Lindsay Scott caught a 93-yard touchdown pass to lift Georgia over Florida in 1980, the year they won the national championship, Munson excitedly called, “I broke my chair.  I came right through a chair.  A metal steel chair with about a 5-inch cushion.  I broke it.  The booth came apart.  The stadium, well, the stadium fell down.  Now they do have to renovate this thing.  They’ll have to rebuild it now.”

It is said he actually did break the chair. 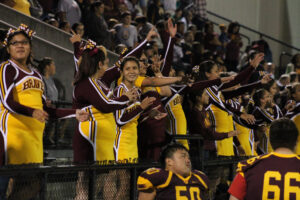 A similar incident occurred this past Friday night at Ray Kinsland Stadium, well not the chair part…at least, I don’t think so.

If you weren’t there, you truly missed a great one, and if you were, you know exactly what I’m talking about.  Jason McMillan caught a Tye Mintz pass with 2.4 seconds on the clock to lift the Braves over the visiting Smoky Mountain Mustangs 32-24.  The crowd went wild, of course.  Actually, the entire place was electric for about the last 14 minutes of the game.

As I stood on the sidelines after Jason’s catch and watched the reactions of players, cheerleaders, coaches, and fans, it got me to thinking about the role that spectators play in a game.  There’s an old sports adage, commonly used as locker room posters, that states, “Championships are won when the stands are empty.”

I agree with that and have written several columns on the importance of off-season preparation and practice.  But, it’s not that hard of a jump to say that players respond better when the stands are full and the energy is high.

Football fans, especially at the high school level, many times are criticized for being over-zealous.  While that sometimes occurs, I can attest that 90 percent of the comments I hear that are directed at players from fans is supportive in nature.  Now, the referees are on their own, but that’s another column.

In the fourth quarter of Friday’s game, you could see the Braves players get pumped up and feed off of the energy of the crowd.  It’s definitely a symbiotic relationship.  When Byron Locust tackled the Mustang’s quarterback to end a Smoky Mountain drive late in the third quarter, the field began to rattle because of the noise.

When Jason caught the pass to win the game, I, too, thought the stadium was going to fall down.

So, here’s to the fans and the cheerleaders that keep that energy going throughout a game.  Here’s to noise.  Here’s to Friday Night Lights.  And, here’s to football!  Keep screaming.

“There’s no such thing as an upset in big-time college football,” David Shaw, Stanford head coach, said after his team defeated USC 41-31 on Saturday.