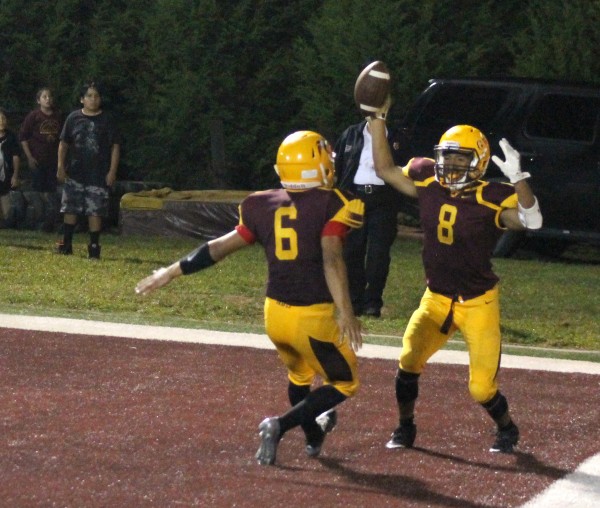 Jason McMillan, Braves senior wide receiver, simply did what he’s probably done hundreds of other times in life – he ran a short crossing route over the middle and caught a pass.  But, this time it was different.  This time, it was a game-winning catch with 2.4 seconds left on the clock that left Ray Kinsland Stadium rocking and Braves fans elated.

McMillan’s touchdown catch from Tye Mintz lifted the Braves (3-2) over the Smoky Mountain Mustangs 32-24 at home on Friday, Sept. 18.

Smoky Mountain tied the game with 40 seconds left on the clock.  Following a short kickoff, the Braves started at their own 40-yard line.  On second down, Mintz took off down the left sideline for a 36-yard gain to the Mustang 15-yard line with only 19.3 seconds left in the game.

Following a sack on first down, Mintz hit McMillan for a first down on the 5-yard line.  The two connected for the touchdown strike on the next play. 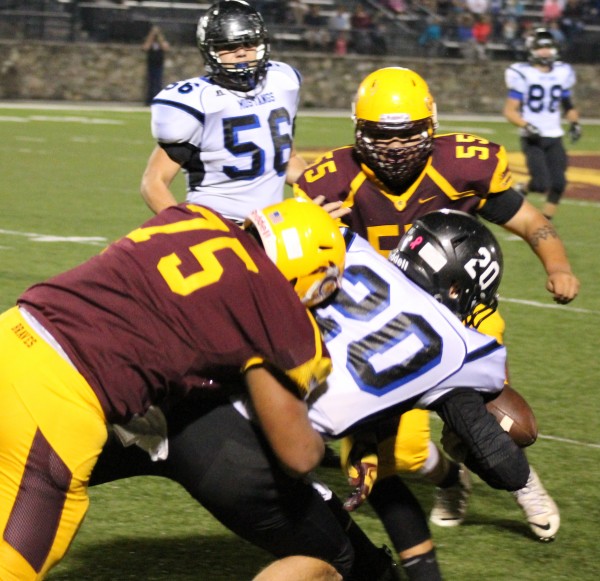 On the game, Mintz completed 13 of 25 passes for 115 yards and 2TDs.  McMillan was his favorite target with 7 catches for 67 yards and 2 TDs.  Mintz also rushed 18 times for 55 yards.  Isaiah Evans joined Mintz in Cherokee’s ground game with 16 rushes for 98 yards.

“It’s so great for our players,” said Braves head coach Kent Briggs.  “They fought through adversity.  We had some players out.  People stepped up, but the key thing is that we played physical.  Smoky Mountain is a physical team, and we played physical too.”

Smoky Mountain head coach Dave Napert served for several seasons as an assistant to Briggs when he was head coach at Western Carolina University.  “I have a lot of respect for Coach Napert and their program and what they’ve done this year,” said Coach Briggs.  “Getting a victory here tonight is very special.  I feel very proud of our guys with how hard they played. Even though we’ve been in the same situation before and not gotten it done, we stepped across that line tonight and got it done.  I’m really proud of our young men.”

The game started with both defenses dominating the line of scrimmage.  Three punts later (two by Cherokee, one by Smoky Mountain), the Mustangs started at the Cherokee 34-yard line.  Several plays and penalties later, Chase Fisher ran the ball in from about two inches out for the first score of the game.  Devon McCabe added the extra point and Smoky Mountain took the lead at 7-0 with 4:20 left in the first quarter.

Cherokee’s next possession started at their own 26-yard line.  They put together an impressive 17-play drive that took almost eight minutes off of the clock.  It culminated with Mintz hitting McMillan in the right corner of the end zone on an 8-yard touchdown pass.  Mintz, on a keeper, ran for the two-point conversion to give the Braves an 8-7 lead three minutes into the second quarter.

The Mustangs drove down and McCabe kicked a 32-yard field goal as Smoky Mountain retook the lead (10-8) with 3:44 left before the half. 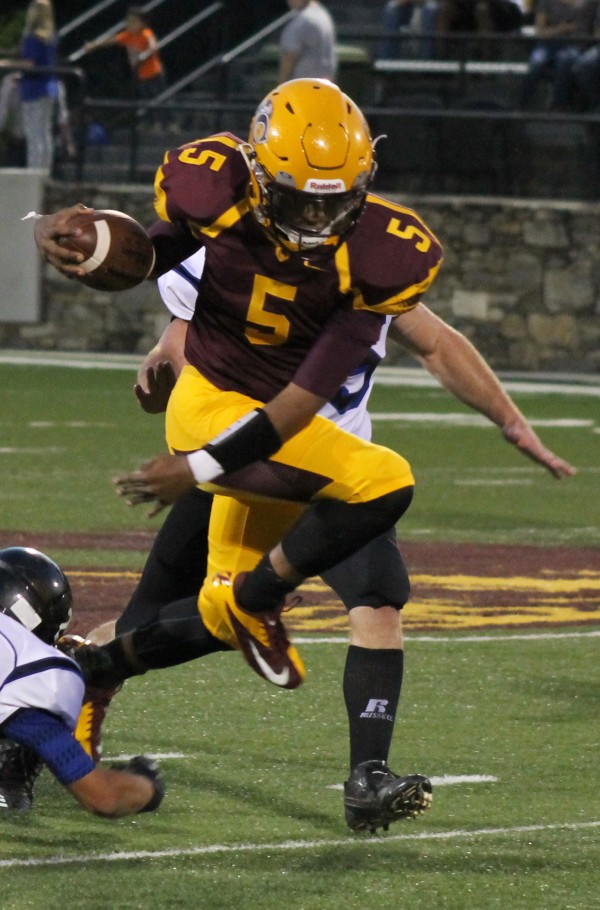 Isaiah Evans (#5), Braves freshman tailback, runs hard in the first half. He ended the game with 98 yards on 16 carries.

The Braves only needed 35 seconds to answer that score.  After starting in good field position at their own 42-yard line, Cherokee somehow managed to get in eight plays in that short amount of time.  Mintz hit Darius Blanton on a 20-yard touchdown pass on a 4th and 4 play.  Evans ran for the two-point conversion and Cherokee led 16-10 at the 3:09 mark in the second quarter.

Both teams were forced to punt on their next possessions, and the Braves took their lead into the locker room.

Cherokee’s defense held the Mustangs to a three-and-out in their first possession of the second half.  The Braves offense put together a 9-play drive that took up half of the third quarter.   After starting on their own 29-yard line, Cherokee drove down the field and scored as Mintz ran 17 yards around the left side for the touchdown.  Mintz hit McMillan for the two-point play to make it 24-10 at the 6:41 mark in the third.

Smoky Mountain decided to make the game interesting and answered quickly as Eli Cole found a seam and ran 54 yards for the score.  McCabe added the point-after, and the Mustangs cut into the Braves lead at 24-17 with just 4:33 left in the third.

Both teams would punt on their next possessions to bring the game into the fourth quarter.

Cherokee turned the ball over on downs on their first possession of the fourth, and Smoky Mountain set up shop at their own 33-yard line.  The Braves defense stiffened and held them on the first two downs to set up a 3rd and 10.  Kennan Panther and Jaylen Evans combined on a big stop on third down to force a Mustangs punt.

McMillan fielded the punt, returned it 20 yards, but fumbled the ball in a pile-up.  It was recovered by the Mustangs who started at the Cherokee 42-yard line with 4:58 left in the game.  Ten plays later, Cole ran in from 5 yards out for the tying score with 40 ticks left on the clock.

McMillan will get atonement 38 seconds later as he caught the winning score.

The Braves hope to add to their two-game winning streak as they host the Murphy Bulldogs on Friday, Sept. 25.

To view or purchase photos from this game, visit: https://onefeather.smugmug.com/SPORTS/FOOTBALL/BRAVES-FOOTBALL-2015/Vs-Smoky-Mountain-September-18/i-MWQpDhp