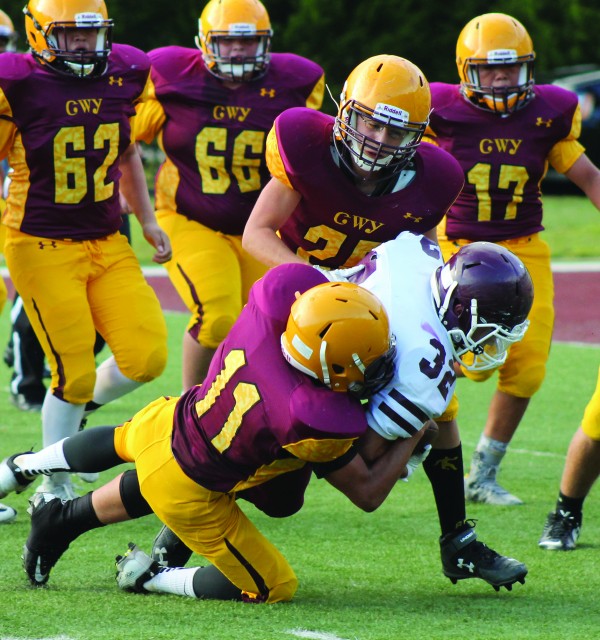 “It was a tough game,” said JV Braves head coach Chris Mintz.  “We’re battling some injuries in some key spots right now, and offensively, we’re struggling.  They did a great job tonight of taking everything we wanted to do away.”

He praised the play on the other side of the ball, “I think our defense played as well as we have all year long.  That was a bright spot.”

That’s when they started going backwards.  A negated touchdown on second down due to a Swain ineligible receiver downfield pushed the ball to the 28-yard line for a 2nd and 21.  Cherokee’s Wesley Wildcatt sacked Bradley on second down to bring up a 3rd and 28 from the 35-yard line.  On third down, Swain was penalized for intentional grounding which brought up a 4th and 40 from the 46-yard line.

Cherokee lineman Malakai Tooni ended the Maroon Devils’ drive with a big sack on fourth down, and the Braves took over on downs at their own 47-yard line with 3:45 left in the quarter.

The Braves were unable to move the ball, and were forced to punt.  Swain took over at their own 40-yard line and drove down to the Cherokee 23-yard line in eight plays.  On 1st and 10 from the 23, Swain fumbled the ball which was recovered by Cade Mintz at the Cherokee 15-yard line.

Several plays later, Cherokee was backed up due to a penalty and Mintz was sacked in the end zone by Swain’s Conner Hyatt for a safety.  Swain led the Braves 2-0 with 6:33 left before the half. 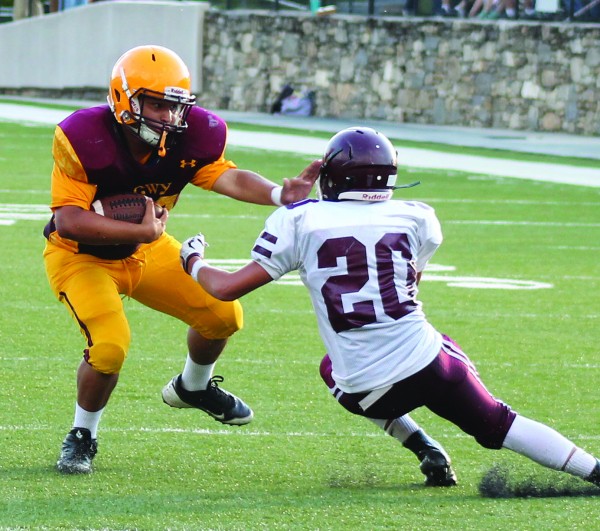 Cherokee’s Xander Brady (#42) gives a stiff arm to Swain’s Hunter Burrell during the first half of Thursday’s game.

Due to the safety, Cherokee had to kick to the Maroon Devils who started their next possession at the Cherokee 34-yard line following a 16-yard return by Diren Dills.  Five plays later, Swain scored the first touchdown of the game in a strange fashion.  Garrett McCoy fumbled the ball which was picked up by teammate Colby Taylor who ran it in for the score.  Bradley passed to Dills for the two-point conversion and Swain took a 10-0 lead with 5:01 left before the half.

Cherokee started their next possession at their own 33-yard line.  On first down, Mintz carried the ball 13 yards to the 46-yard line.  Several plays later, he threw a long pass, intended for Sterling Santa-Maria, that was intercepted by Jacob Waldroup.

An alert Santa-Maria didn’t give up on the play, stripped the ball and recovered it at the Swain 9-yard line.  A personal foul penalty on the Maroon Devils on second down moved the ball to the 6-yard line.  An errant snap on third down went over Mintz’s head and was recovered by Swain’s Kade Briggs.  Swain ran out the clock on the half.

Cherokee had a three-and-out on their first possession of the second half and Swain took over, following a punt, at mid-field.  The Braves defense held strong and forced a three-and-out as well.

After starting their next possession at their own 22-yard line, Cherokee got a first down on an 18-yard run by Wildcatt.  But, the drive stalled after that and Cherokee turned the ball over on downs at their 46-yard line.

Seven plays later, Swain’s Colby Taylor ran 17 yards for the second touchdown of the game.  The two-point conversion pass failed and the Maroon Devils led 16-0 with 35 seconds left in the third quarter.

Neither team could move the ball in the fourth quarter, and the game ended at 16-0.

The JV Braves travel to Murphy on Thursday, Sept. 24 to take on the JV Bulldogs at 6pm.

To view or purchase photos from this game, visit: https://onefeather.smugmug.com/SPORTS/FOOTBALL/JV-BRAVES-FOOTBALL-2015/Vs-Swain-September-17/i-Hzm6Cjz