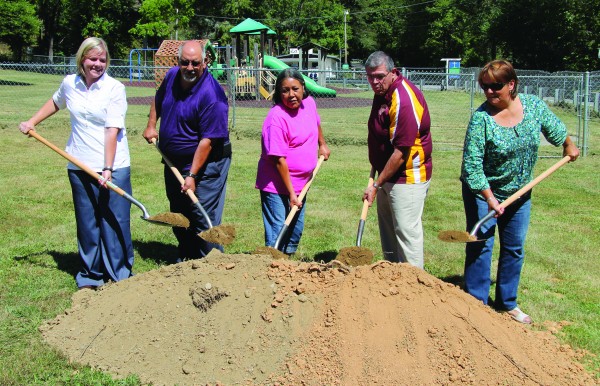 Students at the Big Cove Day Care will have a brand new building for the 2016-17 school year.  Ground was broken on the new facility, located off of Big Cove Road, on Thursday, Sept. 17.

“I especially want to thank the people that had a part in bringing this new building to the children of Big Cove,” said Big Cove Rep. Perry Shell.  “This is an historical place that we’re standing on right here.  Big Cove School was here.”

He went on to say, “It’s important to put this in an historical perspective and the impact it has had on the student’s lives and their world view and how they see things and do things.”

Damon Lambert, EBCI Building Construction manager, noted that construction is set to begin in mid-October and should be completed by August 2016.  The 6,500 square foot building was designed by PFA (formerly Padgett-Freeman Architects).  The budget for the project is $1,922,000 and is being funded entirely by the Eastern Band of Cherokee Indians. 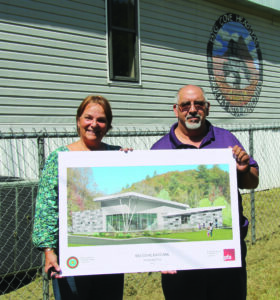 “I hope that when this new building is built to replace this modular,” Rep. Shell commented, “that the kids will receive what is needed to help them have a more fulfilling and happier life.”

She commented that she is also looking forward to the new gymnasium and community center for the Big Cove Community.

“Our community feels the vital importance of educating people from the time they are born,” said Rep. McCoy.  “We never quit learning.  A Big Cover never stops learning. We encourage education so thank you very much.  We look forward to this.”

Natalie Cooper-Case, EBCI Head Start administrative director, said her program is “ecstatic” about the new building being started.  She thanked tribal leaders and officials for their support and related, “We hope that we can increase Early Head Start numbers.  We are expanding the numbers that we are taking up here.  We are currently taking 24, and we hope that can expand to 36.”