Tye Mintz, Braves sophomore quarterback, accounted for six touchdowns and 300 total offensive yards as he led Cherokee to a big win over the visiting Cosby (Tenn.) Eagles at home on Friday, Sept. 11.  The Cherokee Braves (2-2) broke a two-game losing streak and pulled to .500 on the season with a big 52-22 win.

Cherokee rushed for a total of 260 yards in the game.  In addition to Mintz’s yardage, Steven Swayney had 13 carries for 110 yards and Dodge Crowe had 5 carries for 43 yards and 1 TD.

He added, “I’m just proud of our guys for coming up with a victory.  Cosby is a hard-fighting team, and they never gave up so we had to keep on playing.  We have to look at some film and make corrections, but the key thing is we went out and got a victory.”

The Braves got the ball first in this contest and wasted no time.  They put together a six-play, 63-yard drive that culminated with Mintz scoring on an end-around keeper.  The point-after failed and Cherokee led 6-0 at the 10:17 mark in the first quarter.

Cosby answered quickly though.  After starting their first drive on their own 40-yard line, the Eagles went 60 yards in 10 plays for the score as Matt Lane ran in from four yards out on a 4th and goal play.  The two-point conversion failed and the game was all tied up at 6-6 with 5:35 left in the first.

Cherokee started its next drive at their own 35-yard line.  Mintz hit McMillan on a 20-yard pass play on first down to take it inside Cosby territory.  Several plays later, the two connected again – this time on a 21-yard pass which took it down to the Eagles 22-yard line.

Steven Swayney, Braves running back, ran 10 yards on first down to the Cosby 12-yard line, and Mintz finished off the drive on a 12-yard touchdown run on the next play.  Mintz hit McMillan, who made a diving catch, in the right corner for the two-point conversion and Cherokee took a 14-6 lead at the 2:28 mark in the first. McMillan finished the night with six catches for 133 yards and 2TDs. 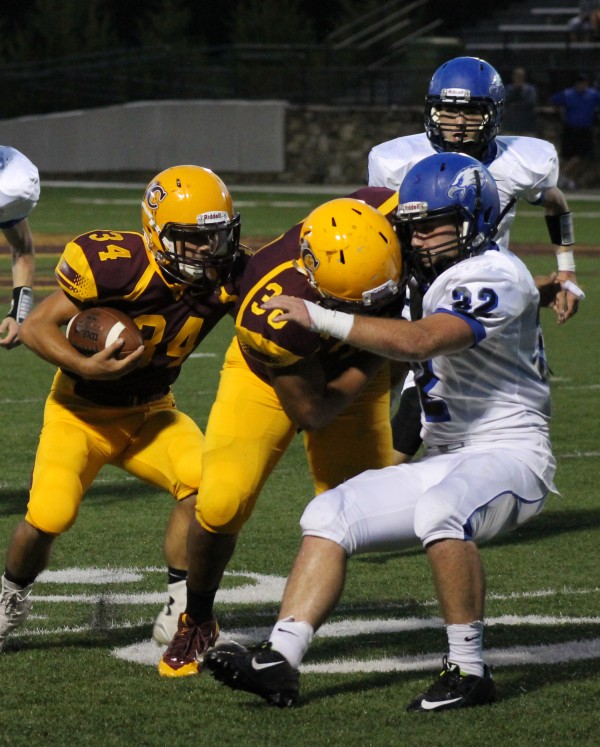 Teamwork is the name of the game. Cherokee’s Kennan Panther (#36) puts a hard block on Cosby’s Jacob Jackson (#32) to allow Braves running back Steven Swayney (#34) around the end for a big gain.

Neither team was able to move the ball effectively in their next three possessions.  Cosby turned the ball over on downs twice and Cherokee punted once.

The Braves started their next drive at their own 38-yard line midway through the second quarter.  Swayney ran for 10 yards on first down which was followed by a McMillan reception for 24 yards which took the ball into Eagles territory.  Several plays later, Mintz and McMillan connected on a 26-yard touchdown pass.  Mintz hit McMillan in the corner again for the two-point conversion and the Braves extended their lead to 22-6 with 4:43 left before the half.

Cosby turned the ball over on downs again on their next possession, and the Braves took over at their own 10-yard line.  Several plays later Mintz threw a 38-yard pass to Darius Blanton to put Cherokee deep into Eagles territory.  Two plays later, Mintz scored his second rushing touchdown of the game on a 2-yard run with just 34 seconds left in the half.  Mintz hit McMillan for the two-point conversion, and Cherokee took a 30-6 lead into the locker room.

The Eagles came out gunning in the second half and put together a 7-play, 67-yard scoring drive which ended with a 37-yard touchdown run by Cody Earls.  Lane passed to Earls for the two-point conversion and Cosby cut into the Cherokee lead 30-14 at the 8:53 mark in the third.

The Braves would answer though…and, quickly.  Four plays and only 31 second later Mintz hit McMillan on a 41-yard touchdown pass.  Mintz threw to Blanton for the two-point play, and Cherokee led 38-14 with 8:22 left in the third quarter.

Cosby came right back.  They started with excellent field position at the Cherokee 49-yard line.  On first down, Jacob Jackson ran 47 yards down to the Braves 2-yard line.  Then, he took the ball the rest of the way for a 2-yard score.  The two-point conversion was good, and the Eagles got back to within 16 (38-22) at the 7:49 mark of the third.

Cherokee started its next drive at their own 38-yard line.  Seven plays later, Dodge Crowe ran 28 yards for a score.  Mintz passed to Swayney for the two-point conversion and Cherokee was up 46-22 with 4:44 left in the third.

Both teams turned the ball over on downs on their next possessions.  McMillan ended Cosby’s next drive with an interception on the right sideline.  After taking over at their own 43-yard line, the Braves put together a 7-play drive which culminated with Mintz scoring this third rushing touchdown of the night on an 8-yard run.  The two-point try failed, and Cherokee led 52-22 which is how the game would end.

To view or purchase photos from this game, visit: https://onefeather.smugmug.com/SPORTS/FOOTBALL/BRAVES-FOOTBALL-2015/Vs-Cosby-Tenn-September-11/