Great Smoky Mountains National Park officials have announced the closure of the Whiteoak Sink area effective now through March 31, 2016 to limit human disturbance to bat hibernacula and help hikers avoid interactions with bats. Park biologists will be monitoring the site throughout the winter collecting population, ecological, and behavioral data that will inform resource managers developing a long-term protection plan. An extended closure through late spring may be recommended if the winter data suggests such an action would increase the chances for survival of a significant number of bats.

Park biologists have reported dramatic declines of cave-dwelling bat populations throughout the park. The decline is thought to be due to white-nose syndrome (WNS). Infected bats are marked by a white fungal growth on their noses, wings, and tail membrane. The skin irritation damages skin tissue causing the bats to wake from hibernation during winter months. Once aroused, the bats burn energy at a much faster rate depleting stored fat. With no food source available during the winter, the bats soon die. 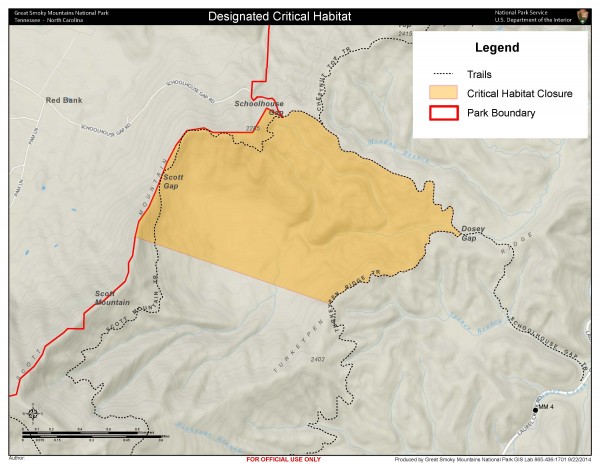 Infected bats exhibit unusual behavior including flying erratically during the day, even during winter months, and diving down toward people.   They may be seen flopping around on the ground around cave openings.

“We first confirmed the presence of WNS in the park in 2010,” said Park Wildlife Biologist Bill Stiver. “The impact has been devastating. We estimate that some of our cave-dwelling bat populations have already declined by 80 percent and we are doing everything we can to both slow the spread of the disease and protect the remaining animals by closing caves and areas near caves to the public.”

The park is home to 11 species of bats including the federally endangered Indiana bat and the Rafinesque’s big-eared bat which is a state listed species of concern in both Tennessee and North Carolina. Bats play a significant role in maintaining ecological balance as the primary predators of night-flying insects. Biologists estimate that an individual bat can eat between 3,000 to 6,000 insects each night including moths, beetles, and mosquitoes.

Great Smoky Mountains National Park is cooperatively working with other parks and federal, local and state agencies across the country to protect bats and manage cave habitats. In an effort to prevent the unintentional spread of WNS by people, the park closed all of its 16 caves and two mine complexes to public entry in 2009. Ongoing research in the Smokies includes monitoring bat populations in the winter during hibernation and tracking bats in the summer to determine habitat use. A recent plan released by the U.S. Fish & Wildlife Service aimed at stabilizing the dramatic decline of the Indiana bat identified hibernacula found in the Sinks as one of only 13 sites across the country identified as critical habitat for this endangered bat. Wildlife biologists have determined that giving the bats the chance to survive includes establishing protective zones surrounding critical habitat caves.

Humans are not susceptible to WNS because the fungus requires a cold body temperature to survive, but skin-to-skin contact with bats should be avoided due to other transmittable diseases such as rabies. Bats are the only mammal species in the park that have tested positive for rabies. According to the Centers for Disease Control and Prevention, the transmission of rabies virus can occur from minor, seemingly unimportant, or unrecognized bites from bats. For human safety, it is important not to touch or handle a bat. The Department of Health and Human Services recommends that individuals should seek immediate medical attention if they have had skin-to-skin exposure to a bat.