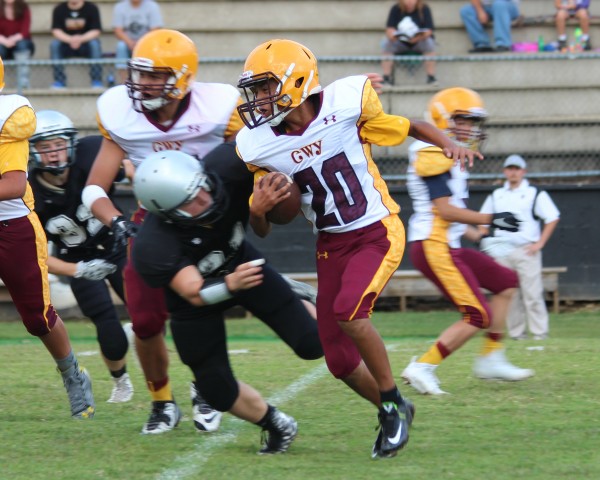 Cecil Walkingstick (#20), JV Braves running back, attempts to run by a Robbinsville defender during an away game on Wednesday, Sept. 9. (AMBLE SMOKER/One Feather)

The Cherokee JV Braves (0-2) lost to the Robbinsville Black Knights (3-0) by a score of 26-6 on Wednesday, Sept. 9 at the Big Oaks Stadium in Robbinsville.

“It was a tough loss, but I felt like we gave a great effort,” said Head Coach Chris Mintz.  “We were in it until the very, very end.  A player moved up (to varsity) and one of our other running backs was hurt and didn’t get to play very much, so we are a whole new backfield (offensively).”

Robbinsville scored the first points of the game on a short run from Austin Loving.  A two-point try failed and gave the Black Knights a 6-0 lead at the 3:43 mark of the first quarter.  Cherokee’s following drive would stall, giving Robbinsville the ball in their own territory.

Cherokee’s defense held Robbinsville and forced a punt when number 42 (name unavailable) blocked the punt, setting up Cherokee deep in Robbinsville territory.  Cherokee’s number 11 (name unavailable) would put the ball in the end zone one play later.  A two-point try failed as Cherokee tied the game at 6-6.  The tied ballgame wouldn’t last as Robbinsville returned the kickoff which put the Blackknights ahead, 12-6.  The two-point attempt failed.  The game remained scoreless throughout the rest of the second quarter.

To view or purchase photos from this game, visit: https://onefeather.smugmug.com/SPORTS/FOOTBALL/JV-BRAVES-FOOTBALL-2015/At-Robbinsville-September-9/