Cherokee Historical numbers up this year 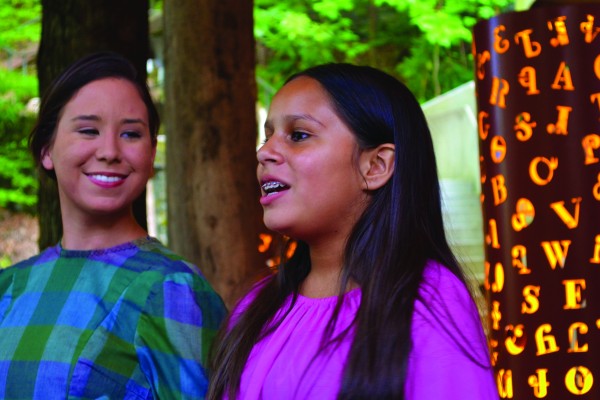 Actors Kara Morrison (left) and Dori Reed (right) speak with VIP audience members before a July performance of Unto These Hills. Tickets sales at the drama were up 9.5 percent this year. (CARSON LAMBERT/One Feather internt)

It has been a better year for Cherokee Historical Association (CHA) attractions.  Ticket sales and revenue are up this year at both the Unto These Hills outdoor drama and the Oconaluftee Indian Village.

“It’s been an excellent year,” John Tissue, CHA executive director, told Tribal Council during a report given during their regular session on Thursday, Sept. 10.  “It’s been hard work.  We got here with good staff.”

Tissue reported that ticket sales at Unto These Hills are up 9.5 percent over last year and overall revenue from the drama is also up 9.5 percent.  Ticket sales to the Village are up 14 percent and revenue is up 12.5 percent.

He said both attractions have received good online traffic and related the Village received the Trip Advisor Award of Excellence for the third straight year with Unto These Hills receiving the award for the first time this year.  “We get an occasional bad review, but most of them are positive.”

A package deal with the Museum of the Cherokee Indian combining tickets to that attraction with Unto These Hills and the Village were offered for the first time this year and sold a total of 2,816 packages.  He also said partnerships with the Visit Cherokee website and the Cherokee Chamber of Commerce website have been fruitful.  Tissue related that CHA received $109,000 in sales relating to traffic from the Visit Cherokee site and $60,000 in traffic from the Chamber site.

“These have been very good to us.”

Cherokee Co. – Snowbird Rep. Adam Wachacha posed the question a friend of his suggested, “Why not invest in a dinner show?”  He said it could be offered in another venue during the fall and winter months.  “Why don’t we tell our story year-round?”

Big Cove Rep. Teresa McCoy supported the idea, “I think it’s well worth looking into.  It’s something new and different.”

Painttown Rep. Tommye Saunooke asked if CHA was self-sustaining and Tissue commented, “We get $200,000 from Tribal levy.  It’s been wonderful and has helped us get stable.”

Tissue said CHA currently has 150 permanent and seasonal employees with 95 percent of the employees at the Village being EBCI tribal members and 60 percent at Unto These Hills being tribal members.