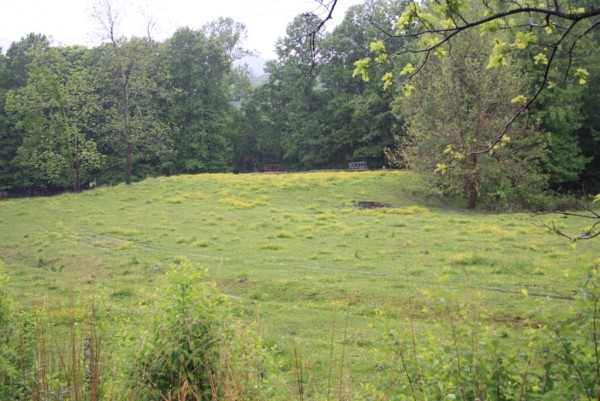 The Eastern Band of Cherokee Indians is set to purchase close to 12 acres in Graham County, and in doing so will take ownership over an historical Cherokee site. The land, known as the Tallulah Property, is home to the historical town of Tallulah and a mound. (Photo courtesy of TJ Holland/Junaluska Museum)

The Eastern Band of Cherokee Indians is set to purchase close to 12 acres in Graham County, and in doing so will take ownership over an historical Cherokee site.  The land, known as the Tallulah Property, home to the historical town of Tallulah and a mound, is set to be purchased for $170,000 from owners Ronald Williams and Sherry Williams.

During its Budget Council session on Tuesday, Sept. 8, the Tribal Council approved legislation to allow Principal Chief Michell Hicks, on behalf of the Tribe, to enter into a contract for the purchase of the historical site.

“Tallulah joins Kituwah and Cowee as cultural properties that have been regained by the EBCI,” said TJ Holland, Junaluska Museum.  “Tallulah is unique in the fact that this is the first mound property purchased that was lost directly as a result of the Cherokee Removal in 1838. Kituwah and Cowee were taken as a result of the Treaties of 1817 and 1819.”

During the discussion on the legislation, Big Cove Rep. Teresa McCoy commented, “I want to see the appraisal.  I already know what the archaeological (report) will say.”  She said the site is very historical and added, “It is a good buy, but I need to see an appraisal.”

Cherokee Co. – Snowbird Rep. Brandon Jones commented, “When dealing with historical places like this, appraisal is not taken into account.  If we want to get that mound back, this is probably the price we’re going to pay for it.”  He said that cows are currently being allowed to “trample all over” the mound.

Rep. McCoy added, “I would like to purchase the property, but I would like to see the appraisal.” She said it is very disturbing to her that cows are being allowed on the mound.

Rep. Jones was asked about comparable land prices in the area, and he related that the average in the area was $5,000 an acre.  “If we get it, it’s just for historical purposes.”

Cherokee Co. – Snowbird Rep. Adam Wachacha said the Tribe should employ an in-house appraiser.  “At least then, we’d have some comparables.”  He added, “There are cows out there, and it isn’t fun to watch something like that knowing that every other site like that we have we do our due diligence to protect it.”

Rep. McCoy said she agrees with the idea of an in-house appraiser.  She said that anytime the Tribe tries to buy a property, it seems the price goes up.  “Everyone within 20 counties thinks that we have deep pockets and that we’re just swimming in money.”

Rep. Wachacha said the historical value to him is worth the price.  He made a motion to pass the legislation.

Tribal Council Chairwoman Terri Henry related, “My history is priceless, and so I don’t see how you can put a value on that.”

The legislation passed with an amendment from Big Cove Rep. Perry Shell stating that the title search would be completed.