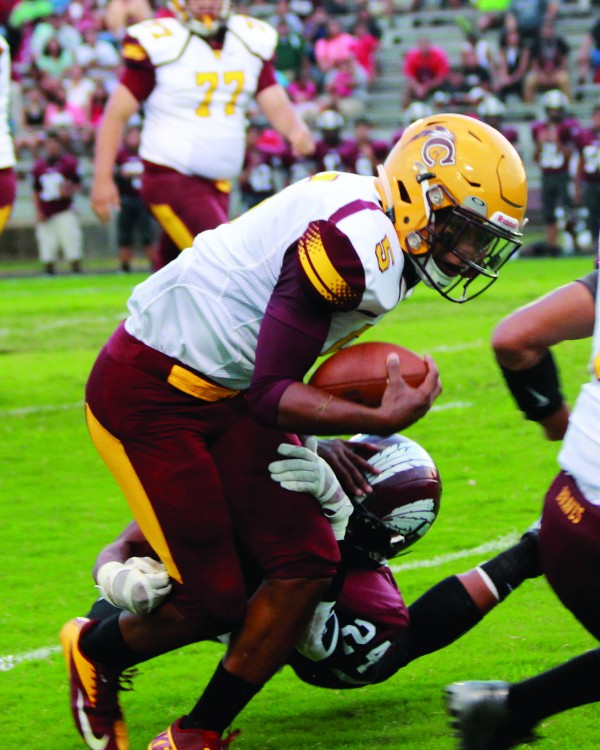 Isaiah Evans (#5), Braves running back, tries to break a tackle in the first half of the Battle of the Nations game at Choctaw Central. On the game, he had 63 yards on 10 carries and one touchdown. (AMBLE SMOKER/One Feather)

PHILADELPHIA, Miss. – The 2015 Battle of the Nations between the Cherokee Braves and the Choctaw Warriors concluded in dramatic fashion as the Warriors slightly edged the Braves 21-20 in a game that would be decided in the final seconds of regulation.

The Warriors found the end zone early after quarterback Bryce Billy capped off a quick opening drive with a touchdown run from 4-yards out.  A Brandis Johnson’s extra-point would put the Warriors on top 7-0 at the 10:14 mark in the first quarter.

Cherokee quarterback Tye Mintz led the Braves downfield as running back Isaiah Evans, powered his way into the end zone with his own 4-yard touchdown run.  A failed PAT would bring the score 7-6 at the 5:41 mark of the first quarter.  After another Choctaw drive, QB Billy would contribute another 4-yard touchdown run as Johnson kicked a field goal attempt to bring the score to 14-6 at the 00:55 mark of the first quarter.

The second quarter had long drives from both Choctaw and Cherokee, but neither team was able to find pay dirt and the Warriors took a 14-6 lead into the locker room.

Cherokee opened the third quarter with the ball, but would trade possessions with the Warriors.  On the second possession of the third quarter, the Braves drove deep into Warrior territory.  Mintz capped off the drive with a gutsy quarterback keeper from 4-yards out as he violently met a Choctaw defender at the front-left pylon but was able to cross the line for a touchdown.  Mintz found receiver Holden Straughan in a post-route for the 2-point conversion to tie the game at 14-14 at the 6:06 mark in the third quarter.

Cherokee drove the ball into Choctaw territory but was encumbered by a handful of penalties, which left them facing a long field. On the second-to-final play of the game, Cherokee passed the ball, but a Choctaw defender stripped the receiver in the open field and recovered the fumble.  The Warriors would take a victory formation on the next play to end the game.

Logan Teesateskie led the Braves defensively with 10 tackles.  Kennan Panther and Will Davis contributed 8, and Byron Locust had 7.

Choctaw’s Bryce Billy led the Warrior offense by going 13 for 33 with 209-yards passing with 1-TD and 1 interception.  Billy also had 65 yards rushing on 15 carries.

To view or purchase photos from this game, visit: https://onefeather.smugmug.com/SPORTS/FOOTBALL/BRAVES-FOOTBALL-2015/At-Choctaw-Central-September-4/