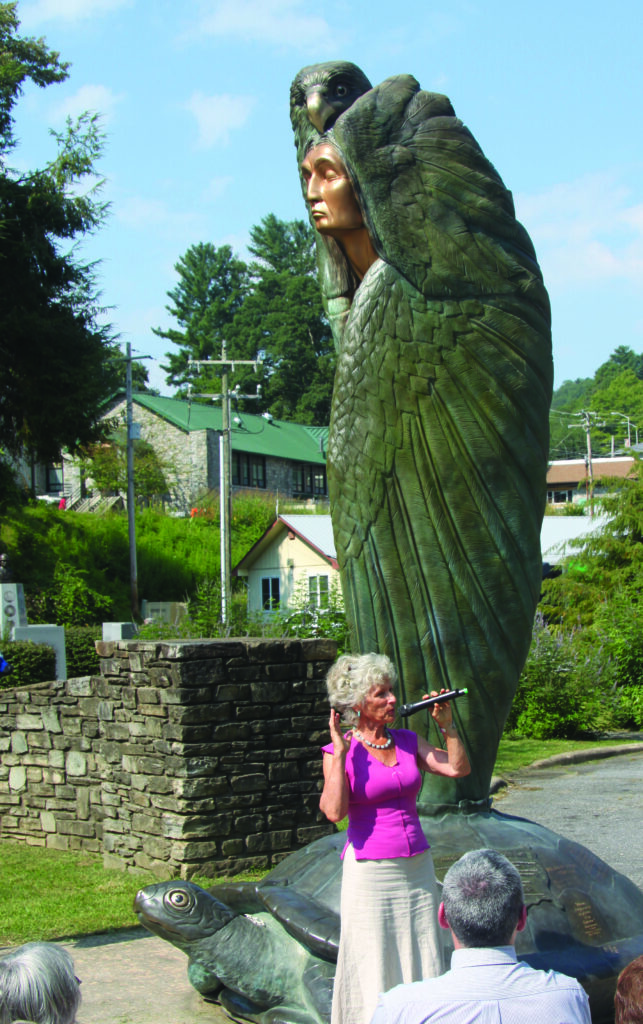 Francis Jansen (front in pink), sculptor of the Transformation Through Forgiveness statue, speaks at a send-off event for the piece which will soon be moved to Northeastern State University in Tahlequah, Okla. (ROBERT JUMPER/One Feather)

During an emotional ceremony on Friday, Aug. 28, the “Transformation through Forgiveness” sculpture that has been in place adjacent to the Cherokee Veterans Memorial at Council House Loop for over a decade was prepared for transport to Tahlequah, Okla. The ceremony started shortly after 10am with the Cherokee Junior ROTC posting colors for the event, followed by Cherokee songs performed by the New Kituwah Academy School Singers.

Phyllis Ashenfelter, on behalf of the Principal Chief and Principal Vice Chief, welcomed approximately 40 guests to the farewell event for the sculpture. Bo Taylor, executive director of the Museum of the Cherokee Indian, offered a song in honor of the occasion as he had all in attendance stand and face east. Driver Pheasant shared a Cherokee legend during the ceremony.

Mary Jane Letts provided a history of how the sculpture came to Cherokee. The “Transformation through Forgiveness” was originally planned to be moved to different tribal locations annually. Letts saw it in Oklahoma and was so inspired by it that she felt it must come to Cherokee. At the time, the sculptor had made arrangements for it to be displayed in Canada, but for some reason the Canada showing was cancelled. This led to an opportunity to move the sculpture to Cherokee in 2002.

Lianna Costantino, chairperson of the Healing and Wellness Coalition, shared her personal testimony concerning the “Journey to forgiveness and Healing” following the route of the “Trail of Tears” in 2012. She spoke of generational grief and trauma.

Costantino commented, “To choose not to forgive, once you have been made aware that it is a choice, is detrimental to your wellbeing.” She shared that the sculpture has been very inspirational to her. She said that seeing it on a regular basis helped her to understand that “the Creator was trying to tell her something”.

Francis Jansen, the sculptor of “Transformation through Forgiveness”, spoke to the crowd. She referred to the sculpture as a “monument”.

She shared her personal experience with grief and abuse. Jansen also spoke of everyone’s life journey and where it leads individuals and talked of being taught to fear in her life and her journey of transformation was to overcome the fear that was instilled in her at an early age. Later, Jansen said she began to have “visions in stone” of Native American faces.

She said, “Transformation through Forgiveness is a call to all human kind for the reconciliation of man’s inhumanity to man”.

The Director of Government Relations for Northeastern State University Jerry Cook explained that a special area had been prepared for the sculpture at the university in Tahlequah and that the plan is now for it to be placed there permanently. He stated that he will be taking some of the Eastern Band Cherokee spirit back to Oklahoma with the sculpture.

Rich Panther closed out the speakers for the ceremony. He is with the Healing and Wellness Coalition. He said that the monument has been very inspirational to him personally. The theme of transformation through forgiveness is common to many people. Panther said we are challenged to move through the pain to a place of healing. We are here to live a better life and many times that better life starts with forgiveness.