ON THE SIDELINES: When eating becomes a sport

Those of you who know me personally, know that I am a true sports fanatic.  I love all sports.  I even get up early during the winter weekends to watch bobsledding and luge.  So, it should come as no surprise that I thoroughly enjoy watching competitive eating.

Competitive what?  Yep, it’s real and is governed by MLE (Major League Eating), formerly the International Federation of Competitive Eating, which sponsors eating events all over the country in various foods including chicken wings, ribs, oysters, tamales, and the most famous of all – hot dogs. 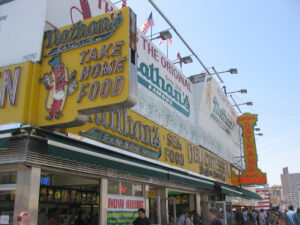 The Nathan’s Hot Dog Eating Contest has been held on Coney Island, New York every July 4 since 1972.  The event will air again this year on ESPN (told you it was a sport).  Eight-time defending champion Joey Chestnut will be vying for his ninth Mustard Belt which goes to the winner of the annual event.

Chestnut is also the current world record holder with 69 hot dogs (including buns) consumed in 10 minutes.  That is a lot of dogs.  According to Nathan’s, each hot dog is 290 calories, 17g fat, 24 g carbohydrates, and 11g protein.  So, in 10 minutes, he consumed over 20,000 calories and over 1,100g of fat.  And, I was worried because I had two Indian tacos this past week?

The event itself has grown tremendously over the years since Jason Schechter won the inaugural event and the prize of a certificate for 40 more hot dogs.  The contest was originally 3.5 minutes long, shifted to 12 minutes in the early 2000s and then scaled to the current 10 minutes in 2010.

Women have competed for several years now, and in 2011, a separate women’s category was added with Sonya “The Black Widow” Thomas taking home the inaugural championship.

ESPN has been enjoying a viewership of over 1 million for the past several years and crowds at the event number over 40,000 annually.  So, before getting going with your July 4 activities, take an hour to check out this very unique and very American event.  You won’t be disappointed.

“Whoever is getting me is getting a jewel.  I feel like I’m the steal of the draft,” said Kelly Oubre Jr., the Kansas stand-out who was drafted by the Washington Wizards.