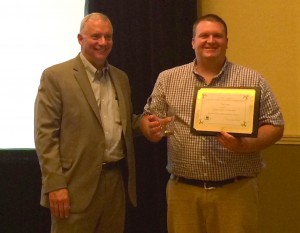 Patrick Breedlove, project manager within the EBCI Office of Environmental and Natural Resources, commented, “We were very excited to receive the award because of the all of the hard work we’ve put in down there.  It sets the stage for the Tribe leading all other southeastern tribes as far as horticultural work and green infrastructure.”

The EPA released the following statement to the One Feather on the Tribe’s award, “The Cherokee Native Plant Facility project illustrates a life-cycle approach to solving an environmental problem using green infrastructure, which is what the Raincatcher Award recognizes. The Tribe wanted to restore historical floodplains for propagation of culturally significant plants and reestablishing historical fisheries communities. The cost of plant material for reforestation of floodplains was significant.”

“So, through collaboration and partnerships, they resolved that it would be economically opportune to breed their own plant stock.  A significant cost in running any nursery is water use.  The cisterns installed at the Native Plant Facility have not only reduced the necessary purchased water, reducing costs for the Tribe, but, they also capture rainfall at its peak force, reducing runoff quantity and velocity.  The retention and reuse of this stormwater further removes pollutants as plants filter the water they use. EPA recognized this project because of its strength in meeting advertised criteria, and innovative thinking in solving an environmental challenge.”

The 2,200 square foot Facility opened in July 2014 and encompasses a total of five acres with a 2.2 acre irrigated grow yard.  Tribal Council passed Res. 615 (2015) on June 4 to name the facility in honor of Jessie Owle Dugan, an EBCI tribal member from the Birdtown Community.  The resolution states in part, “Mrs. Dugan exemplified the spirit of the Eastern Band’s commitment to its natural resources and its native flora and fauna.”