The N.C. Forest Service is reporting outbreaks of two forest pests that have already had significant impacts on trees in the western part of the state. 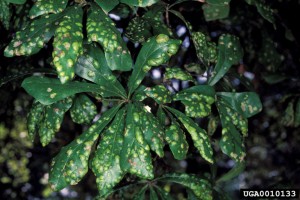 Chemical control is not needed, as the disease affects only the leaves and, as with most defoliating pests, a single year of defoliation will not affect the long-term health of the tree, Lane said. Landowners are instead encouraged to maintain general tree health, such as watering during dry periods.

The yellow-poplar leaf mining weevil is damaging mostly yellow-poplars, but it can also attack magnolias and sassafras trees, Lane said. Adult weevils feed on leaf tissue in April and May. They then mate, lay eggs, and when the immature weevils emerge in early summer, they mine the leaf, or feed on the internal tissues. As a result, the leaves die and turn brown.

Most years, infestations are not widespread and are generally not considered a threat to yellow-poplar timber, Lane said. Outbreaks have been recorded in the Eastern U.S. since 1960. During the 1960s, outbreaks similar to the ones being seen now caused significant foliage loss on yellow-poplar in the Appalachian Mountain region, Lane said.

Foliage destruction temporarily reduces the aesthetic values of landscape trees. To manage the pest, promoting general tree health is best. The outbreak should subside on its own, especially with the help of native wasps, which destroy up to 50 percent of the weevil larvae, Lane said.