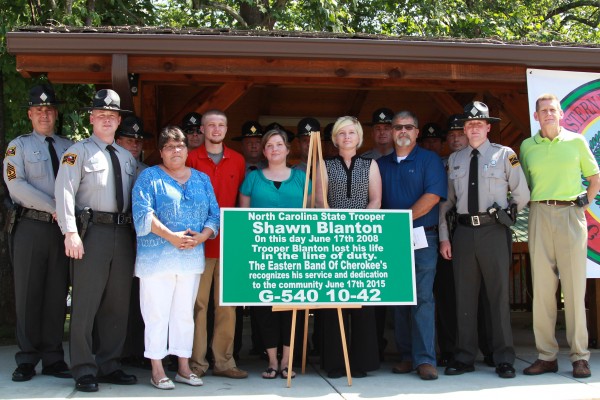 Friends, family and colleagues are shown in front of a sign that will be placed at #24 bridge in downtown Cherokee as it was dedicated to the late Trooper David Shawn Blanton (G540) on Wednesday, June 17. (AMBLE SMOKER/One Feather photos)

“As a father, I’m proud and humbled that my son would be honored in such a way,” said David Blanton, Shawn’s father.  “His life is a testament to (the saying), ‘it’s not the amount of years you have on this earth; it is what you do with those years.’” 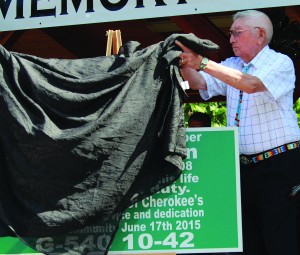 Principal Chief Michell Hicks and Vice Chief Larry Blythe spoke about the impact Shawn had on the Cherokee community during the ceremony.   Colleagues and superiors from the North Carolina State Highway Patrol who worked closely with Shawn also spoke about their time with Trooper Blanton.  They commended the work of Blanton’s family to help other families in the community while preserving the memory and legacy of Shawn.

“This bridge will serve as a reminder to all who see it, that Trooper Blanton was a courageous hero that made the ultimate sacrifice so that we can all have hope,” said Billy Clayton, Deputy Commander for the North Carolina State Highway Patrol.

Mollie Grant explained, “Every time he would get off a shift, he would drive down Soco Mountain and go across this bridge on his way home.  With it being the seventh anniversary of his death and that number being sacred to the Cherokee, that was a reason why we wanted to name this bridge after him (today).” 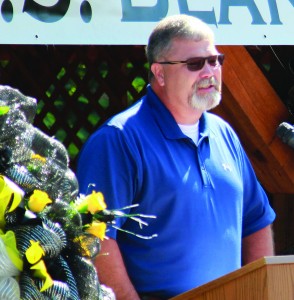 At the conclusion of the ceremony, Mary Lambert, John Henry Maney, and Nikki Nations unveiled the sign that will be displayed on the newly named bridge.

Trooper Blanton valiantly served his community until he was fatally wounded during a routine traffic stop on I-40 near Canton seven years ago.

“He was an overall great friend, and I miss him tremendously,” said NC State Highway Patrol Officer Joe Henderson. “If you were having a bad day, you could hang out around him and he would brighten your day up.  Even if he was in a bad mood, his laugh was just contagious.”

To view or purchase photos from this event, visit: https://onefeather.smugmug.com/2015-Community-Events-and-News/Bridge-Dedication-for-Trooper/i-HrkxGR2