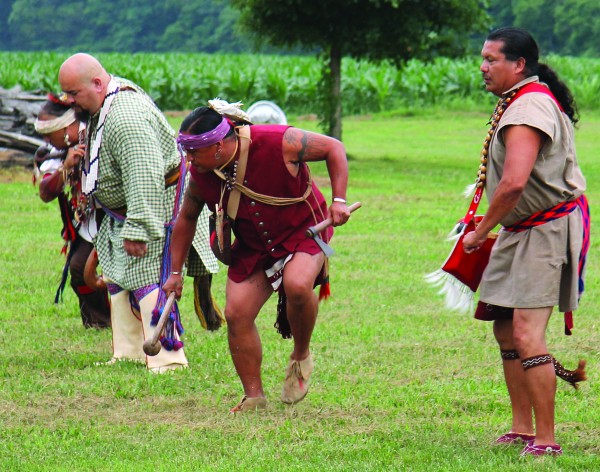 The Warriors of Anikituwah saw a need within the community, and they’re trying to do their part to help.  During the recent Cherokee Voices Festival at the Museum of the Cherokee Indian, the Warriors raised $511 that they will donate to help with the construction of the new Cherokee Children’s Home.

Bo Taylor, a member of the Warriors of Anikituwah, said the group brought back a tradition that hasn’t been done in nearly two centuries.  “What they would do when returning from a war party is lay a skin out.  The warriors would come and throw some of their loot from their exploits, the spoils of war.  They would tell about what they did and they would dance.  All of the things that were collected were given to the widows and the children left behind of the warriors that didn’t make it home.”

He added, “It’s kind of a way of taking care of them.  It is right at about two hundred years since it’s been done, but we did that so we could honor our Children’s Home which is being built.  We knew that they were raising money, and the Warriors felt like we needed to give.  We danced for them, and we raised $511.”

The new Cherokee Children’s Home is being built on 28 acres located on Goose Creek Road in the Birdtown Community.  When completed, the new Home will consist of two cottages, each with nine beds and other amenities.

“The Cherokee Boys Club and Cherokee Children’s Home are extremely grateful to the Warriors of Anikituwah for their work and donation on our behalf,” said Cris Weatherford, Cherokee Children’s Home director.  “We currently have two grants that require matching funds.  One of these grants is with the RTCAR Program through the Agricultural Extension Office and the Cherokee Preservation Foundation.  This grant is for an edible landscape for the new Children’s Home facility.   The new landscape will include as many varieties of edible fruits, nuts, berries and greens as we can grow.  This will provide us with cultural learning opportunities for the children to learn how to cultivate, pick, prepare and eat food that can be grown locally.”

Weatherford reiterated the importance of the donations.  “These wonderful donations will be used at their maximum capacity to benefit this program.  It is nice to know we have these guys fighting on our side!”

The Warriors of Anikituwah are also planning to raise funds for the Children’s Home at the Cherokee July 4th Pow Wow during a Cherokee Warriors dance special they are sponsoring.

“We’re going to do the same thing there and lay a skin out there and all money raised will be given to the Children’s Home,” said Taylor.  “We’re encouraging people to give and to help the Children’s Home.  It’s our civic responsibility to try to take care of our young ones.”

Taylor said the Warriors performing the dance have to pay to be able to be out there.  “They have to give as well.  They can’t just go out and say, ‘hey, it’s a blanket dance’.  They have to give in order to go out there and do it.”

Taylor concluded, “From our Tribe that has so much, our kids need to be taken care of.”

To date, the Cherokee Children’s Home project has received funding from various sources including grants from the Cherokee Preservation Foundation and the HUD Indian Community Development Block Grant, a $400,000 donation ($80,000 a year for five years) from the Eastern Band of Cherokee Indians, a $100,000 donation from the Tribal Alcohol Beverage Control Commission, and the  $20,000 grant from RTCAR (Revitalization of Traditional Cherokee Artisan Resources).