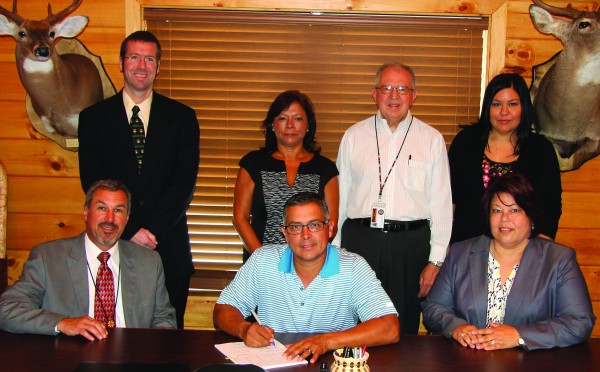 The U.S. Department of Justice has reported that American Indian women “are more than 2.5 more likely to be raped or sexually assaulted than women in the USA in general”.  The DOJ also reports, per its Bureau of Justice Statistics, that at least 70 percent of the “violent victimizations experienced by American Indians are committed by persons not of the same race.”

Until recently, tribal courts throughout Indian Country did not have jurisdiction to prosecute non-Indians for these crimes.  With the passage of the Violence Against Women Reauthorization Act (VAWA) of 2013, that changed.

On Monday, June 15, Principal Chief Michell Hicks signed Ord. No. 526 (2015) into law which amended various parts of the Cherokee Code to put it into line with the provisions of the Special Domestic Violence Criminal Jurisdiction outlined in VAWA.

“This is an incredibly historic day for the Eastern Band of Cherokees,” said Chairperson Terri Henry who also serves as co-chair of the National Congress of American Indians Task Force on Violence Against Women.  “We have fought for many years for this particular piece of legislation.”

“With the signing of this law, we will be able to fulfill our obligations and responsibilities to our people to keep this community safe from non-Natives perpetrators of domestic violence against our Native women.”

Chief Hicks commented, “It’s been a void in our system, and there’s been a lot of hard work put into it (legislation)…our goal today was to get this Ordinance in place which outlines the law of the Tribe and the processes that we will follow.”

One part of Ord. No. 526 deals with changes to the jury selection process.  “VAWA required tribes exercising this authority to provide defendants with a right to a tribal by an impartial jury that is drawn from sources that ‘reflect a fair cross section of the community, and do not systematically exclude any distinctive group in the community, including non-Indians”, the Ordinance states.

The Ordinance amends Cherokee Code Sec. 1-31, in part, to read, “Notwithstanding any other law of the Eastern Band of Cherokee Indians, or any of the tribe’s agencies, eligible jurors shall be chosen from all individuals residing within the boundaries of the Eastern Band of Cherokee Indians trust lands regardless of race or tribal citizenship or tribal affiliation and not excluding any distinctive group in the community, including non-Indians.”

Tribal Prosecutor Jason Smith called the legislation “a tremendous advancement”.  “We are hoping it will ultimately lead towards total sovereignty of tribal courts to prosecute all individuals committing crimes within tribal lands.  It’s going to make our job much, much easier in terms of streamlining the process because the federal system is not designed to handle domestic violence.”

Smith said the federal system wasn’t built to handle everyday domestic violence cases.  “The tribal system is designed to handle our everyday criminal acts, such as things that happen at three in the morning, and it handles those cases much more efficiently.  So, now that we’ll have the ability to handle all of our domestic violence cases in the tribal system, I expect swifter justice and better justice for the people.”