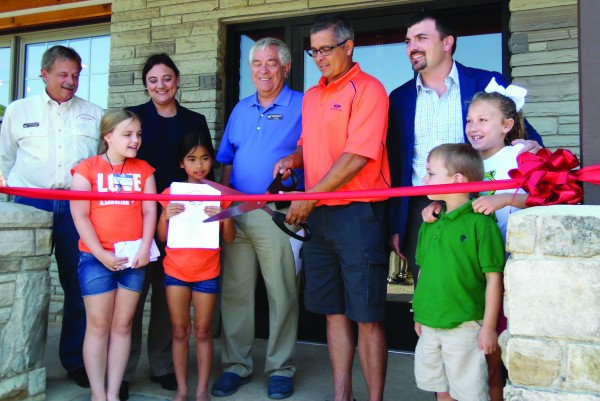 The Fly Fishing Museum of the Southern Appalachians opened its doors to the public with a grand opening kickoff which included a ribbon cutting ceremony with Principal Chief Michell Hicks, a casting clinic, and free barbecue sandwiches on Saturday, June 6.

The non-profit museum, which is owned by the Cherokee Chamber of Commerce and is located beside the Welcome Center on Tsali Blvd, features an assortment of vintage reels, flies, and memorabilia from legendary fishermen across the Southern Appalachian region and beyond.  One such individual is “Uncle” Mark Cathey (1871-1944) who famously remarked, “I been accused of being the best fisherman in the Smokies.”

The Chamber of Commerce hopes that the museum will be able to sustain itself through gift shop sales and individual donations as well as generate more interest in a pastime which already has a sizable economic impact of more than $25 million annually on the Qualla Boundary.

“We have so many fishermen coming here but Cherokee hasn’t historically done a great job to have a single base for fishermen,” said Forrest Parker, EBCI Deputy Operations Officer and museum board member.

This museum now provides anglers from across the country with place to become acquainted with regional fishing culture and also receive information about fishing sites in Cherokee and local retailers.

“They’ve done an excellent job,” said local man Bill Queen.  “The rods, and reels, and all the exhibits really bring back good memories of my fishing in the late [19]50s.”

The idea to put a museum in Cherokee dedicated to fly fishing actually came from Huntersville fishing enthusiast Alen Baker, who, while fishing for Salmon in Nova Scotia visited a museum in the Margaree Valley.  He enjoyed his experience and when a friend later joked that Baker should start his own museum the thought stuck.

As he continued to travel he talked to museums and several state history departments to explore the feasibility of his project.  After many rejections, Bryson City author Jim Casada, a good friend of Baker’s, suggested he pursue Cherokee as a potential site.

Baker presented his dream to Parker who took the idea and ran with it.  The Chamber initially thought to house the collection in their former headquarters which was the log cabin across the street from Dairy Queen on Tsali Blvd.  This building was, however, in desperate need of repairs.

“The next time I came up [Forrest] says, ‘There’s good news and bad news.’  He says, ‘The bad news is they’re not gonna agree to the renovation grant.’  He said, ‘The good news is they think we’re thinking a little small when we ought to be looking at a bigger building,” said Baker.

It did not take long to decide that the building which had previously been the Tee Pee Restaurant was the perfect site.

“The location is ideal here.  It couldn’t be better,” said Baker.  “The Welcome Center’s next door; the Chamber can operate with the Welcome Center in harmony.  It’s just ideal.”

Through extensive fund raising efforts and aid from various grants, the building was transformed from its idle state into the preserve for the region’s aquatic heritage that it is today.  The opening of the museum is a testament to the conjoined efforts of many individuals as well as organizations including the EBCI, Tennessee Valley Authority, Trout Unlimited and the relatively new charity Casting for Hope.

Through the whole process, Baker continuously made the trip back and forth between Huntersville and Cherokee to contribute to making his dream a reality.

As for how he plans to relax in his new-found free time Baker said, “I’m going fishing.”