CULLOWHEE – Brett H. Riggs, a research archaeologist at the University of North Carolina at Chapel Hill who has worked with the Eastern Band of Cherokee Indians on various projects since the early 1990s, will become the new Sequoyah Distinguished Professor of Cherokee Studies at Western Carolina University.

Riggs’ appointment to the endowed professorship, which is effective Aug. 15, follows a national search. He will move into a multi-year, fixed term faculty position held previously by Robert Conley, a noted Native American scholar and prolific author who died last February.

The appointment was approved by the WCU Board of Trustees as part of its quarterly meeting Friday, June 5. 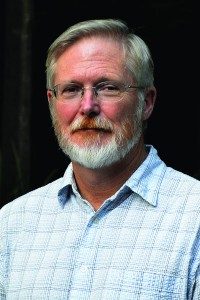 Brett H. Riggs, a research archaeologist at the University of North Carolina at Chapel Hill who has worked with the Eastern Band of Cherokee Indians on various projects since the early 1990s, will become the new Sequoyah Distinguished Professor of Cherokee Studies at Western Carolina University. (Photo by Blake Riggs)

Riggs will build upon existing partnerships between tribal and university leaders and will play an important role in developing and implementing future projects involving WCU, the Eastern Band and other Native American constituents, said Richard Starnes, dean of WCU’s College of Arts and Sciences.

“Brett Riggs is an accomplished archeologist with deep ties with the Eastern Band of Cherokee Indians. He approaches his work with a rare sensitivity that has impressed academics and tribal members alike,” Starnes said. “His arrival at WCU marks a renewed institutional commitment to honoring, preserving and understanding the history and culture of our region’s native people.”

Riggs specializes in Cherokee studies and has worked in Western North Carolina for more than 20 years studying the lives of Cherokee families during the removal era of the 1830s. In his position with the Research Laboratories of Archaeology at UNC-CH, he is helping to establish the National Historic Trail of Tears Long-Distance Trail in the southwestern corner of WNC.

Riggs used the words “honored and humbled” to describe the opportunity of joining the faculty at WCU and serving in the Sequoyah Professorship.

“My colleagues at Western have undertaken exciting initiatives in native health, Cherokee language, history, archeology and public heritage, and I look forward to joining their efforts and building on the foundational work of my predecessors, Robert Conley and Tom Hatley,” he said.

“It is particularly important that we reinforce existing collaborations and partnerships between WCU and the Eastern Band of Cherokee Indians and that we explore new ways of working together to build stronger ties between the tribe and the university,” Riggs said. “I see building that relationship as the core mission for the Sequoyah Professor, and I’m eager to work with the Cherokee Studies Program at WCU to grow and deepen the links with the tribe through engaged and applied scholarship.”

A research archaeologist at UNC-CH since 2001, he worked previously as deputy tribal historical preservation officer for the Eastern Band.

Riggs has an extensive list of publications and reports credits and has presented at numerous professional meetings and conferences. A board member for Friends of Junaluska and the Junaluska Museum, he also serves as executive board member for the National Trail of Tears Association in Little Rock, Arkansas, and was Native Affairs Liaison Committee chair for the southeastern Archaeological Conference.

The $1 million Sequoyah Distinguished Professorship in Cherokee Studies at WCU was fully funded in 1998. Funds to match a state grant for the position came from a number of sources over the course of several years, including the Eastern Band of Cherokee Indians, National Endowment for the Humanities, the Friends of Sequoyah organization, Cherokee businessman James A. “Jimmy” Cooper and Harrah’s Entertainment.