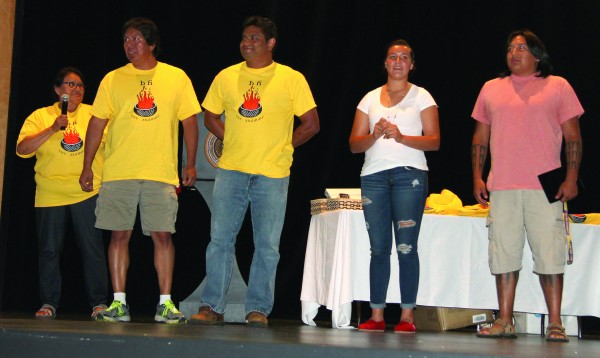 Those interested in becoming Cherokee second-language learners now have a way to learn new words while on the go.  Shi-yo – a Cherokee language app – was officially released during at event at the Chief Joyce Dugan Cultural Arts Center on Thursday, June 4.

“This is a level one app,” said Laura Pinnix, Cherokee Central Schools director of culture.  “This is a beginner.”

Pinnix, who helped develop the app, said the idea was hatched after brainstorming ideas of how to reach the younger generation of Cherokees.  “We keep saying that we’re losing our language, but we don’t need to lose our language.”

She commented that she thought of all of the young people who own smartphones these days and are active throughout the day texting and messaging their friends.  “We must do this,” Pinnix said of developing the app.  “We’ve got to do this now.”

The app itself currently has a database of 250 words which are given in English, Cherokee syllabary, and phonetics.  The words are broken down into 23 different categories including: family, wild animals, colors, numbers, months, days of the week, etc.

“This was a tedious process,” Heather Driver, who worked with Pinnix on the development of the app, said of the voice recording sessions.  “But, it’s worth it.  With this being a mobile app, you can take your language lessons with you.  It’s a good product for our second language learners.”

The app is now available for download at the App Store for free.  An Android app will be coming soon.

The app was funded through a grant from the Cherokee Preservation Foundation.  Sasha Watty, CPF program associate, was at Thursday’s event and commented, “We’re very excited.  It’s been a long work in progress.”