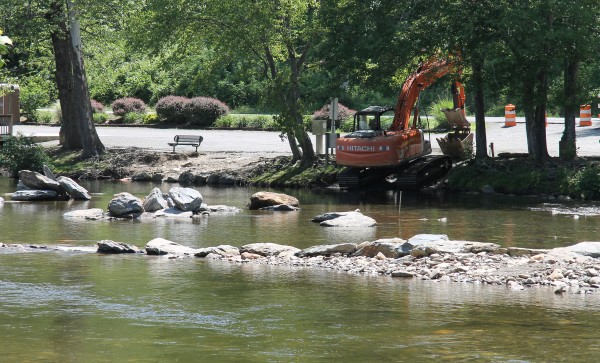 Tribal Construction crews have been placing large boulders into the Oconaluftee River this past week as part of the Island Park Restoration Project. (SCOTT MCKIE B.P./One Feather)

If you’ve wondered why construction crews are putting large boulders into the Oconaluftee River, it is all part of the Island Park Restoration Project.  The project, which will be done in two parts, has the goal of improving the shoreline of the Oconaluftee River Park to prevent further erosion in that area.

“They’re going to build actual rock veins and weirs in the river to help channel the water flow,” said Damon Lambert, EBCI Building Construction manager, who related that the other part of the project will involve “shoeing” the Island by putting smaller rocks on the banks, doing various landscaping on the Island, installing fencing and other projects.

“The Island gets a lot of use,” he said.  “It’s got a lot of erosion.  So, we’re trying to fix that, minimize that and make the Island a lot better for visitors and the users.”

Lambert related that the entire project will last until the end of 2015.  The cost of the project is $400,000, and it is being funded entirely by the Eastern Band of Cherokee Indians.  “Tribal Construction is doing all of the rock placement.  W.K. Dickson is the engineering firm for the project, and they’re on-site during the construction.”

Construction is being planned to minimize impact this summer.