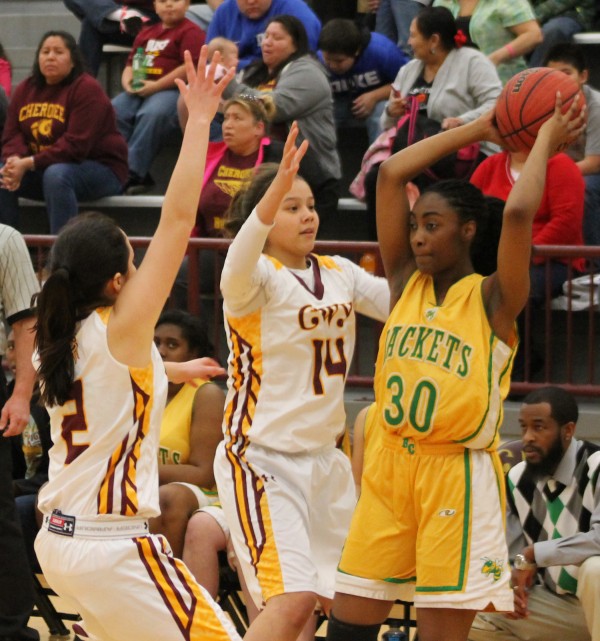 The Cherokee Lady Braves (22-3) started their 1A state tournament in style with a big 78-34 win over the visiting Bessemer City Lady Yellow Jackets on Friday, Feb. 27.  The game, played on Friday afternoon, was originally scheduled for Tuesday, but was postponed several times due to snow.

“We looked like we had two weeks off,” said Lady Braves head coach Chris Mintz.  “We were really rusty, and I’m just glad to be able to have this game right now and be able to get some rust off.  I hope they come back and win a couple more games.”

The first few minutes were slow scoring wise.  The game was tied at 4-4 at the 4:11 mark of the first period.  Then, the Lady Braves kicked it up a notch and scored nine unanswered points in the next 45 seconds to take a 13-4 lead.  They would go on to lead 23-8 by the end of the first.

Cherokee kept it going in the second and outscored Bessemer City 10-2 in the first three minutes.  The Lady Braves’ full court press caused a lot of turnovers, and they were able to extend their lead to 40-16 by the half.

The third period was more even as both teams scored six points each (46-22) in the first two minutes.  Cherokee pulled away some in the waning minutes of the third and led 57-28 going into the fourth period.

At the 5:32 mark of the fourth, Reagan Barnard scored on a layup following a steal and assist by Peri Wildcatt to give the Lady Braves a 71-30 lead thereby invoking the NCHSAA mercy rule.

Individual stats were not available for this game.

To view or purchase photos from this game, https://onefeather.smugmug.com/SPORTS/BASKETBALL/LADY-BRAVES-BASKETBALL-201415/Vs-Bessemer-City-1st-Round/