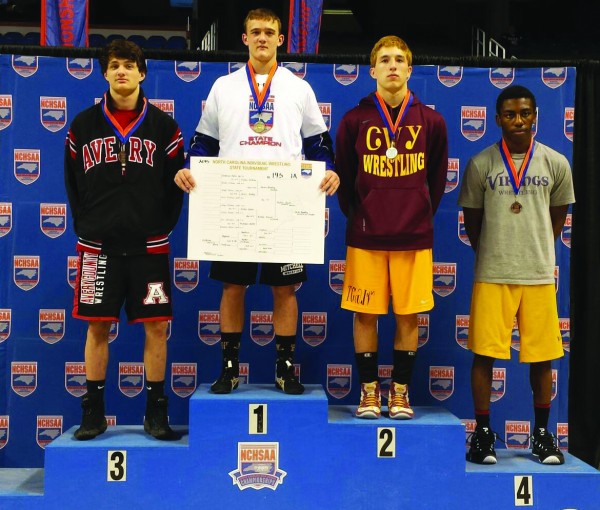 Bradley opened up his state tournament with a win by fall over Joseph Waters (Rosewood) in the quarterfinals.  He then won by fall over Preston Childress (Avery) in the semifinals to advance to the state championship round.  The first place match between Bradley and Dalton Beaver (Mitchell) was hard fought and went all three rounds.  But, Beaver edged Bradley in points to take a 7-4 decision. 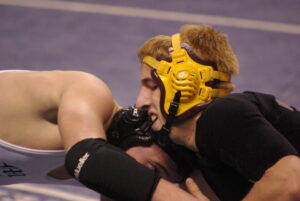 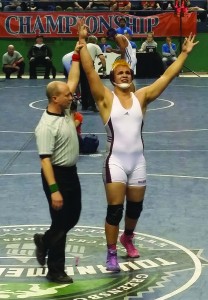 The official raises Spencer McCoy’s hand moments after winning the 220lb division at the 1A state wrestling tournament. It was the third state championship for McCoy, an EBCI tribal member and senior at Swain County High School. (Photo by Vickie McCoy)

McCoy won by fall over Alan Gibson (South Davidson) in the quarterfinals, and then won by fall over Landon Shipman (Rosman) in the semifinals.  In the first place match, he won a 10-4 decision over Will Atkins (Mitchell) to take the title.

Chad McCoy, an EBCI tribal member from Robbinsville, also qualified for Saturday’s state tournament.  He won in the consolation first round with a 6-2 decision over Robert Alvarez (East Montgomery), but then lost in the consolation semifinals to Landon Shipman (Rosman).