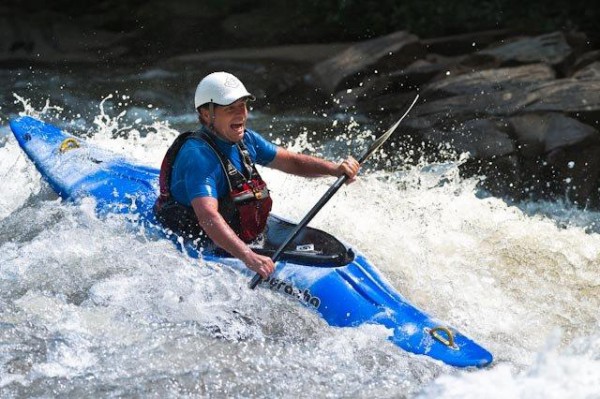 Mark Singleton has a good time on the wild and scenic Rogue River in Oregon. (WCU photo)

The program will begin at 7 p.m. in the theater of WCU’s A.K. Hinds University Center. It is free and open to everyone.

The new speaker series is designed to complement and enhance WCU’s reputation as an epicenter of outdoor adventure, said Josh Whitmore, WCU’s associate director for outdoor programs who oversees the operations of Base Camp Cullowhee. Plans are to bring at least one outdoor adventurer to WCU’s campus each semester to talk about his or her experiences in a variety of recreational activities and to discuss the need for outdoor recreation enthusiasts to advocate for the wild places they love, Whitmore said.

Raised in Pittsburgh, Pennsylvania, and introduced to whitewater paddling at an early age, Singleton earned a bachelor’s degree in outdoor education at Evergreen State College in the state of Washington and spent summers as a raft guide and winters as a ski coach in Wyoming and Oregon. He directed the ski school at Wintergreen Resort in Virginia from 1984 to 1987, and then became marketing manager at Sunday River Resort in Maine in 1988. Two years later, Singleton answered an advertisement for a marketing vice president position at the Nantahala Outdoor Center, the world-renowned whitewater paddling outfitter located near Bryson City, and he got the job.

Singleton left the NOC in 2003 and soon became executive director of American Whitewater, the nation’s primary advocate for the protection of whitewater rivers. Over the years, the organization moved its headquarters from Silver Spring, Maryland, to the WCU campus, and then to downtown Sylva. Under Singleton’s leadership, American Whitewater developed an integrated approach to river restoration and protection work that, over the last decade, has resulted in the protection of flows on more than 30 major whitewater rivers in the U.S. and in the removal of 14 dams that were no longer economically viable.

Singleton’s presentation on March 3 will focus on the region’s recreational assets and threats, and on opportunities for the public to engage in stewardship activities that protect and enhance public lands and outdoor experiences. He also will discuss a recent Duke Power federal relicensing process that led to new access locations on the Tuckaseigee River and talk about the policy objectives of the Outdoor Alliance, a coalition of six outdoor recreation organizations that is working to protect outdoor recreation opportunities.

The outdoor adventure speaker series at WCU is being funded through private donations. Individuals or businesses interested in supporting the series through donations or sponsorships are asked to contact Whitmore at Base Camp Cullowhee at 828-227-3633. More information about the March 3 event is available by calling the same number.