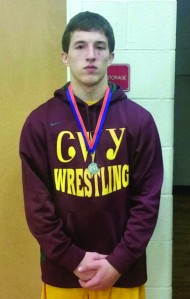 WALKERTOWN – Cherokee’s Jaron Bradley took second place in the 145lb division at the 1A West Regional wrestling tournament in Walkertown on Saturday, Feb. 14.  By doing so, Bradley qualified for the 1A state championship tournament set for Feb. 20-21 at the Greensboro Coliseum in Greensboro.

Following are the results of the other Cherokee wrestlers at Regional: