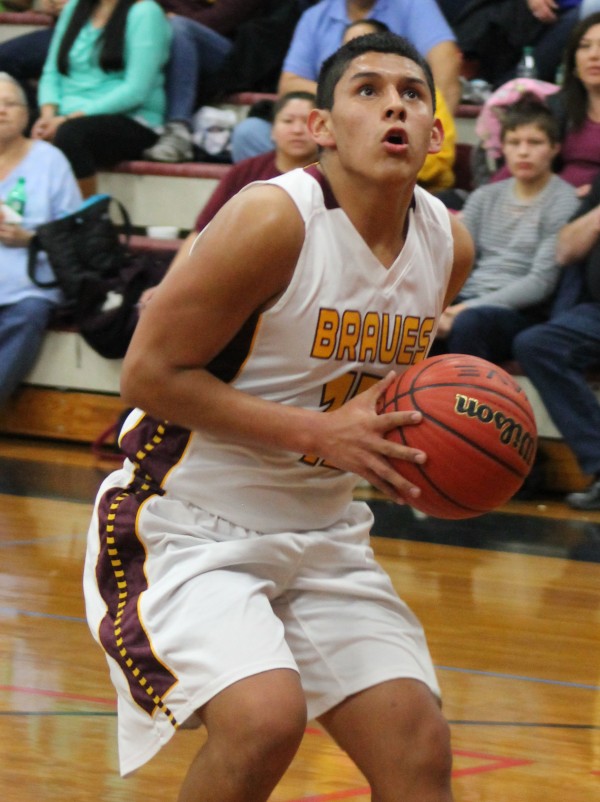 Kennan Panther, Braves forward, goes for a layup in the second half of a game against Andrews in the first round of the Smoky Mountain Conference tournament at Andrews on Friday, Feb. 13. Panther ended the game with 11 points. (SCOTT MCKIE B.P./One Feather)

ANDREWS – The Cherokee Braves (22-2) had a big third quarter in an opening round win over Andrews in the Smoky Mountain Conference tournament at Andrews on Friday, Feb. 13.  The Braves outscored the Wildcats 20-8 in the third on their way to a 73-46 win.

“We played pretty well,” said Braves head coach Willis Tullos.  “It’s hard playing someone three times, especially after you’ve beaten them pretty badly the first two times, to keep your intensity level up.  But, we did a good job.”

Andrews actually got out to a good start in this game and led 7-2 just three minutes in.  But, Cherokee came back and Dustin Johnson, Braves senior point guard, hit a three-point shot to give Cherokee the lead at the 2:58 mark in the first.

The Braves led 14-9 after the first.  The first few minutes of the second quarter was fairly even, and Cherokee led 21-15 at the 5:08 mark.  J.J. Benjamin, Braves senior forward, was fouled while shooting a three-point shot a minute later and made all three of his free throws to give Cherokee a 24-15 lead midway through the second.

The Braves kept up the intensity on defense and were able to take a 37-21 lead into the locker room.

The Braves came out for the third quarter on fire and scored the first 15 points of the quarter.  Andrews got their first basket of the half at the 2:15 mark of the third.  Cherokee led 57-29 going into the final eight minutes.

The Braves were able to get some nice bench play in the fourth quarter and extended their lead to 64-21 midway through.  Cherokee went on to take the big win 73-46.

To view or purchase photos from this game, visit: https://onefeather.smugmug.com/SPORTS/BASKETBALL/BRAVES-BASKETBALL-201415/Vs-Andrews-1st-round-SMC/