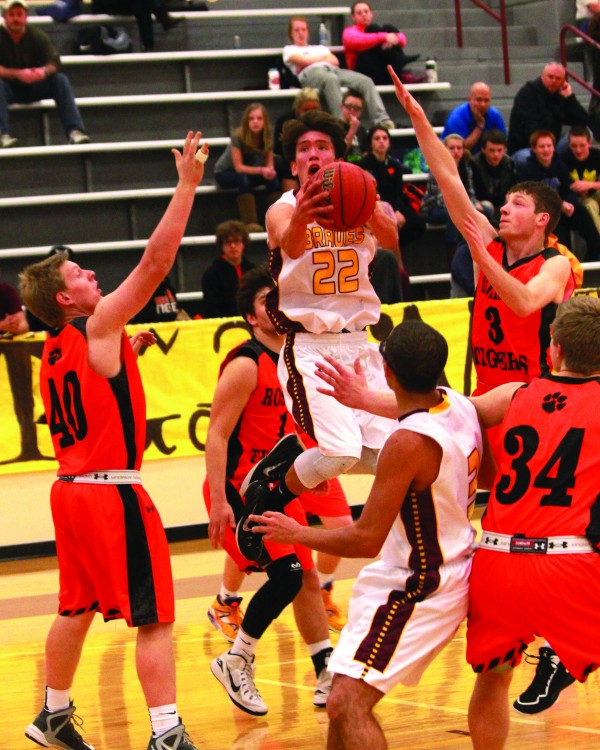 The Cherokee Braves bounced back from a tough loss in Robbinsville with a solid 104-85 victory at home game against the Rosman Tigers on Tuesday, Feb. 10.

“It was a good game to watch,” said Braves Head Coach Willis Tullos after the game.  “Both teams played well and Rosman had really improved.”

The high scoring affair started early when Cherokee built an early lead in the opening minutes of the contest.  The Braves held the Tigers scoreless by defending their basket with a full court press while Eli Littlejohn and Dustin Johnson racked up eight and six points respectively.

However, the Tigers found their footing late in the period and came roaring back to life to chip away at the Braves lead by navigating through the stingy Braves defense and knocking down three-point shots to tie the game.  Cherokee was able to regain control and took a 23-19 lead to the bench after one.

Rosman continued to contest the Braves into the second period, but it was the play from inside the paint by Littlejohn, who scored 12 of his 32 points in the quarter, which made a difference for the Braves.   The Braves outscored the Tigers 25-18 to take a 48-37 lead into the locker room.

Both teams exited the locker room ready to rise as Cherokee built another comfortable lead in the opening minutes of the third.  However, just like before, the Tigers hit five consecutive three-pointers to diminish the Braves lead to just six points with a score of 76-71 going into the final period.  The period had a combined 63 points as Rosman bested Cherokee 34-29 in scoring.

However, it was the final quarter where the Braves were able to seal the victory when they went on an 8-0 run early in the period.

“We got eight real quick points, said Coach Tullos.  “Once we did that, they gave us the lead we didn’t give up.  We made that eight-point run and that made all the difference in the world.”

The Braves almost doubled the Tigers production in the fourth 27-14 to take the 104-85 victory.  J.J. Benjamin hit a free throw around the two-minute mark to put the Braves over the century mark for the third time this season.

Jason McMillan led the Braves in steals with six and rebounds with nine.  J.J. Benjamin also grabbed nine rebounds while nabbing three steals and getting a major blocked shot in the third quarter.

The Braves finished 21-2 on the regular season and took second place in the Big Smoky Mountain Conference.

“Except for two games, it was great season,” joked Coach Tullos after the game.  “We played well, we had a good season.  It’s been a hard season, but the kids played well.  They deserve everything they get.”

To view or purchase photos from this game, visit: https://onefeather.smugmug.com/SPORTS/BASKETBALL/BRAVES-BASKETBALL-201415/Vs-Rosman-February-10/