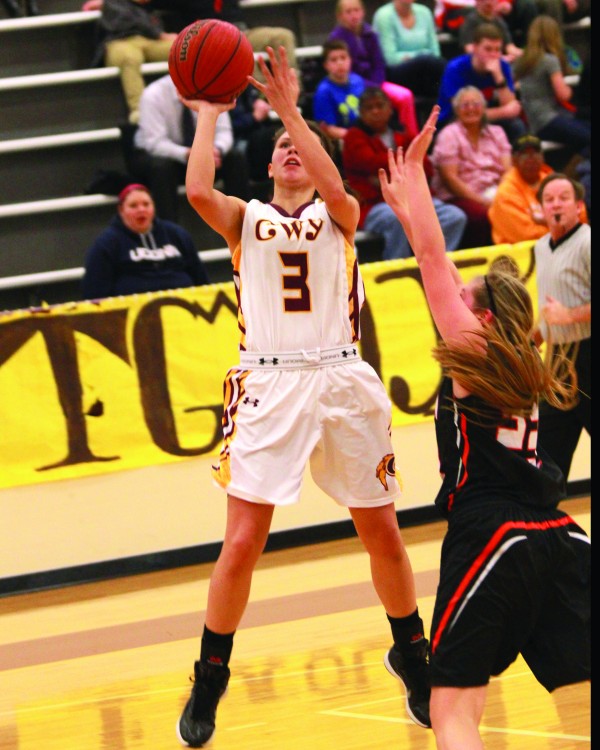 The Cherokee Lady Braves (21-3) closed out the 2014-15 regular season in style after a 73-57 home victory against the Rosman Lady Tigers on Tuesday, Feb. 10.  As a tribute to the last home game in the regular season for the 2015 seniors, the starting lineup consisted of the five seniors on the team.

“It was a great night for our seniors,” said Lady Braves head coach Chris Mintz.  “We had five and they’ve worked really hard this year.  It ended on a good note for them to win tonight.”

The Lady Braves started the game on top in the opening minutes but found themselves in a battle for the lead with the Lady Tigers who capitalized on several miscues by Cherokee.  However, the resilient Braves were able to finish the period strong and took a 15-8 lead to the bench.

A shootout erupted in the third as both teams started pouring in the points as the Lady Braves took a 23-17 advantage at the end of the third to take a 59-32 lead into the fourth.  The Lady Tigers were able to outscore the Lady Braves in the final eight-minutes of regulation 29-14, but Cherokee’s lead was too great as the Lady Braves racked up their twenty-first win of the season.

As the season draws to a close and the teams begin to gear up for post-season play, a bright spot on the night was the return of Peri Wildcatt who suffered a serious knee injury before the start of the season.

Lady Braves assistant coach Ben Stamper commented, “We lost Peri for most of the season and it was good to see her back out there.  We’re missing some pieces with injuries.  We’re just asking the girls to give it all they’ve got.  It’s time to see what our girls are made of.  I asked them in the locker room tonight to play with heart and play for one another.  Leave nothing to chance and put it all on the table.”

The Lady Braves enter the Smoky Mountain Conference as the number-two seed and look to capitalize on the momentum going into the post season.

“It’s tournament time now and it’s one and done.  So hopefully we’ll get to play a few more games,” said Coach Mintz coyly.

Individual statistics were not available for this game by press time.

To view or purchase photos from this game, visit: https://onefeather.smugmug.com/SPORTS/BASKETBALL/LADY-BRAVES-BASKETBALL-201415/Vs-Rosman-February-10/