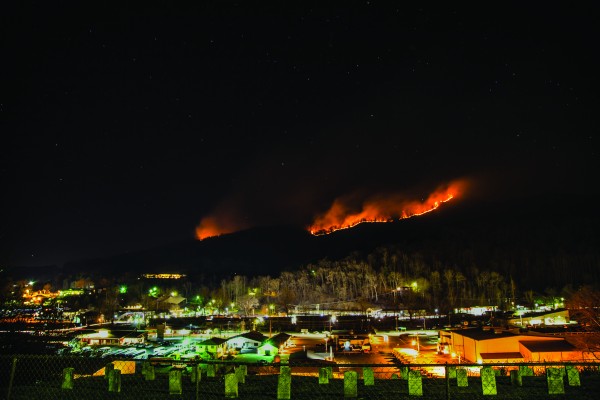 A fire burns on Mount Noble on the night of Saturday, Feb. 7. In all, a total of 500 acres burned according to officials at the Cherokee Indian Agency. (Photo by Kristy Maney Herron/EBCI Commerce)

Arson is suspected in a forest fire on the Qualla Boundary over the weekend. According to Darlene Whitetree, Superintendent of the Cherokee Indian Agency, someone set fire to an area on Mount Noble that resulted in over 500 acres of timber and land being burned.

Whitetree says, at press time, that no homes were endangered by the fire. Fire investigators suspect that someone or some persons set the blaze and attempted to set fires at other locations on the Qualla Boundary.

Whitetree stated that there were locations in the Wrights Creek area and in the Birdtown community where the suspected arsonist struck without success. At the Mount Noble site, crews from the Bureau of Indian Affairs – including smoke jumpers, Great Smoky Mountain National Park Service, the state of North Carolina, the Forest Service and 20 members of the Cherokee Fire Department are involved in fighting the fire.

There is a $10,000 reward for information leading to a conviction in this incident. Anyone may provide their information at 1-800-782-7463.  Callers may remain anonymous.