The United South and Eastern Tribes (USET) strongly endorsed a bill on Monday, Feb. 9 that would remove all trademark protections of the Washington NFL team as long as the franchise retains the R-word racial slur as its team name.

Congressman Mike Honda (D-Calif.) introduced the legislation, entitled The Non-Disparagement of Native American Persons or Peoples in Trademark Registration Act, this week in the U.S. House of Representative. The bill, which already has 26 co-sponsors, seeks to prevent any sports team from using a derogatory slur for Native Americans as its mascot and nickname. 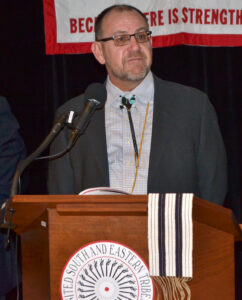 USET President Brian Patterson speaks out on the use of the term Redskins during the first session of the USET Impact Meeting in Washingon, DC on Monday, Feb. 9. (USET photo)

“Congressman Honda has taken a bold stand against racism, discrimination and the continued denigration of Native Americans by introducing this legislation, which USET strongly supports,” said USET President Brian Patterson.  “If the NFL’s Washington’s franchise is unwilling to change the offensive mascot then steps should be taken, wherever possible, to eliminate public funding and trademark protections for a league that persists in offending and insulting Native peoples.”

USET will hold its Welcome Reception Monday, Feb. 9 in Salon Four at the Marriot Crystal Gateway in Arlington, Va.  The reception will feature Congressman Honda and USET leadership, who will reaffirm USET’s strong opposition to the continued use of the R-word and other negative imagery and stereotypes.