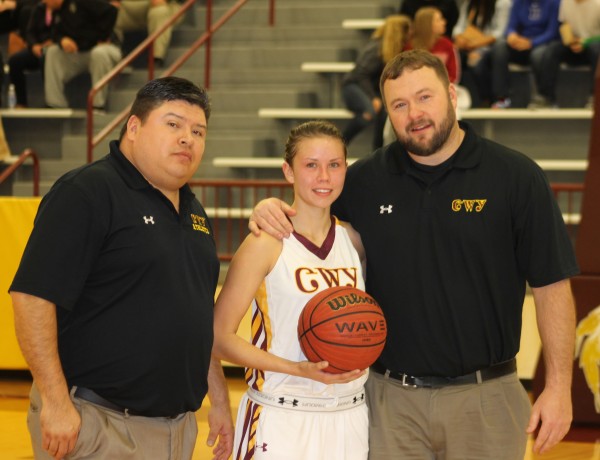 Fans in attendance at Charles George Memorial Arena on Saturday, Feb. 7 as the Lady Braves hosted Hiwassee Dam had the pleasure of seeing history made.  With a short jump shot from inside the paint, Kendall Toineeta, Lady Braves senior point guard, scored the 2,000th point of her high school career.

She was honored during halftime and presented with the ball.  This is an incredible achievement as she is the first Lady Brave in history to score over 2,000 points in a career.

On the season, Toineeta, who will suit up for Lenoir-Rhyne University next season, is averaging just over 23 points a game, and she has consistently led the scoring category for all of western North Carolina.  But, Toineeta is a well-rounded player, and she also is at the top of the leader board in steals and assists.

Toineeta’s basketball career at Cherokee will be over in a little more than a month, but her legacy is sure to endure.  She has always approached the game with grit determination on the court and a smile and laughs off the court.  She is a true testament to being a team leader and an example for the next generation of Lady Braves.  Good luck Kendall with the upcoming tournaments, and good luck as you suit up next season in college.

There is a ton of college basketball, both men’s and women’s, on the weekend of Feb. 13-15.  For a treat, check out Bronson Koenig, Ho Chunk Nation, and his #5 ranked Wisconsin Badgers host Illinois on Sunday, Feb. 15 at 1pm on CBS.  Also on Sunday, some of the world’s best skiers will be in action at the World Alpine Skiing Championships men’s slalom competition at Beaver Creek, Colo.  That will be aired on NBC starting at 4:30pm.