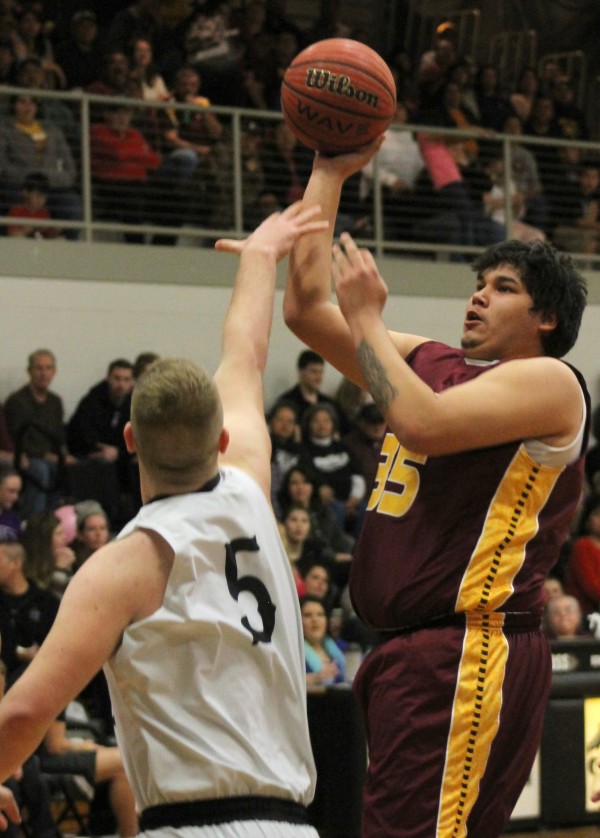 ROBBINSVILLE – The Cherokee Braves (20-2) had a total of four players foul out in a 76-70 road loss at Robbinsville on Friday, Feb. 6.  There were 14 total fouls, seven per team, and three technical fouls called in the first period alone in this emotional game.

“We missed too many free throws,” said Braves head coach Willis Tullos.  “We didn’t shoot the ball well at all in the first half.”

Coach Tullos said he was proud of his team’s effort.  “It wasn’t a lack of effort.  They wanted to win.  They tried the best they could.  Shots didn’t fall and we just got foul after foul…I’ve got nothing but good things to say about our kids.  They played hard.”

The game started evenly with both teams locked at 3-3 at the 5:22 mark in the first.  Midway through the period, the fouls started piling up on both sides including three technical fouls (two for Robbinsville, one for Cherokee).

Robbinsville took the lead (22-21) at the 6:37 mark in the second and extended it to a 33-24 lead with 2:40 left before the half.  But, Cherokee came storming back with three baskets in a matter of seconds.

Dustin Johnson, Braves senior point guard who led Cherokee with 22 points on the night, got a lay-up then stole the ensuing inbounds pass and got another lay-up immediately.  Jason McMillan, Braves forward, got a steal seconds later and got a layup to bring the Braves to 34-30 with just over two minutes left in the half.

Eli Littlejohn, Braves center, played strong inside all night and scored eight of his 21 points on the night in the third period.

Robbinsville extended its lead slightly in the third and led 50-42 with three minutes left in the period.  They would extend their lead to 10 points (57-47) with less than a minute left, but Littlejohn hit a shot at the buzzer to bring it to 58-51.

The fourth period was hard for the Braves who saw four of their starters foul out including: Littlejohn, Johnson, McMillan and Brandt Sutton.

But, Cherokee managed to keep it close, and Sutton actually tied the game (65-65) on a three-point shot with 4:38 remaining just prior to fouling out.

Robbinsville hit a couple of key free throws late and were able to regain a four-point lead (69-65) with three minutes left; a lead they were able to keep and get the 76-70 win.

To view or purchase photos from this game, visit: https://onefeather.smugmug.com/SPORTS/BASKETBALL/BRAVES-BASKETBALL-201415/At-Robbinsville-February-6/