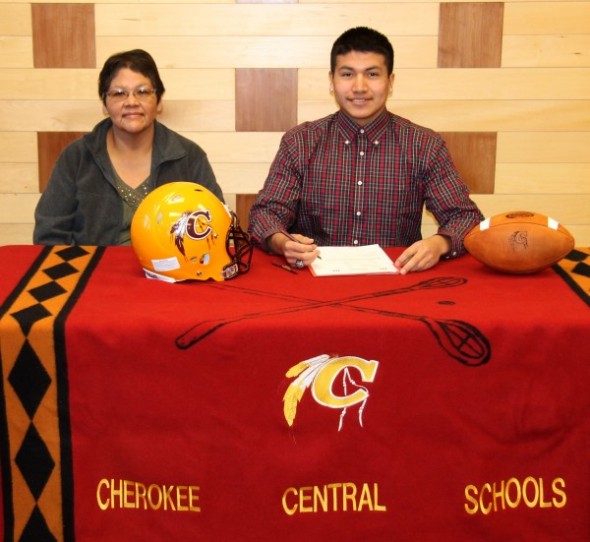 Channing Lossiah, who played linebacker and wide receiver for the Cherokee Braves this past season, signed a letter of intent on Friday, Feb. 6 to play college football at Lenoir-Rhyne University.

“It’s a dream come true,” said Lossiah who made 109 tackles as a linebacker this past season.  “I’ve always dreamed of this ever since I started high school, and I’m just counting down the days.  It feels great.”

Lossiah also had 16 receptions for one touchdown.

Braves head coach Kent Briggs commented, “He’s a hard worker. He has a lot of potential.  He played good defense for us this year.  He also played receiver and had some really key catches for us.  I think, at the college level, he’ll be looking at playing outside linebacker which will be a good position for him.  This year, due to our loss of some defensive lineman, he had to play a lot of times on the line of scrimmage.  I think his best potential at the college level is to be an outside linebacker where he can drop into space and play from that position.”

Channing’s mother, Susan Lossiah, commented, “I’m just really proud of him.  He can accomplish whatever he wants.”

To view or purchase photos from this event, visit: https://onefeather.smugmug.com/SPORTS/FOOTBALL/Channing-Lossiah-signs-with/