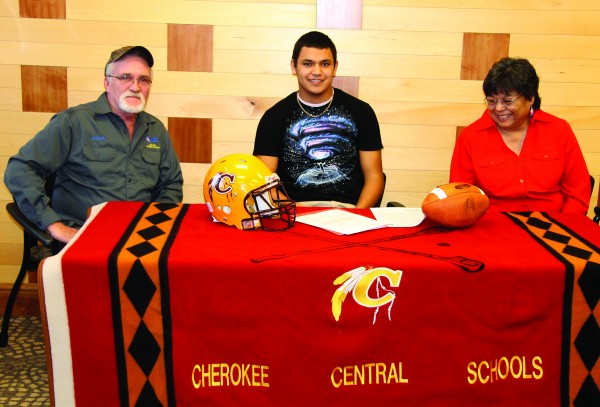 After one year at the helm as quarterback of the Cherokee Braves, senior Brandon Buchanan will be a Bear next season.  He signed a letter of intent on Wednesday, Feb. 4, National Signing Day, to play college football for Lenoir-Rhyne University.

“I feel honored,” said Buchanan.  “I’m the first one out of my family to sign.  I’m excited.  I just plan to work hard, get my degree and hopefully get to have some playing time out there.”

Braves head coach Kent Briggs related, “I’m very excited for Brandon.  He really deserves this opportunity to play at the next level.  I’ve been around student-athletes from high school to college for the last 30 years, and Brandon is very special.  I feel like he’s just barely touched the tip of the iceberg for his potential.”

Coach Briggs said what Buchanan was able to accomplish in his first year as a quarterback was incredible (passing for 1,377 yards and 14 TDs and rushing for 431 yards and 7 TDs).  “I can only imagine what he’d be like if he had been playing quarterback for the last five or six years like most quarterbacks do so I’m looking forward to see what he can do in college.”

Coach Briggs went on to say, “His potential is so great, and he’s got so much room for growth in all aspects that I really believe he’ll be a super player.  I think he can play anywhere.”

Patty Buchanan, Brandon’s mother, commented, “Brandon’s worked awful hard for this, and he’s had that determination.  He’s firm in his commitment.  He’s went through all of the colleges, spoke to coaches, and I think he’s picked a good college.”

To view and purchase photos from this event, visit: https://onefeather.smugmug.com/SPORTS/FOOTBALL/Brandon-Buchanan-signs-with/