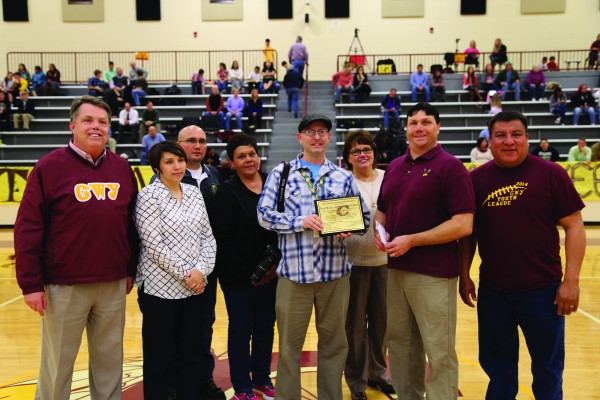 At the half time break of the Cherokee High School versus Murphy girls basketball game at home on Tuesday, Feb. 3, game announcer Shawn Crowe called for the entire school board and Cherokee One Feather reporter Scott McKie Brings Plenty to assemble at half court.

Once assembled, school superintendent Scott Penland took the microphone to say that, in recognition of many years of reporting and supporting the Cherokee school sports programs, the Cherokee Central School System would like to honor Scott at the game and to present him with a plaque. Superintendent Penland stated, “Scott and the Cherokee One Feather have covered the student athletes and promoted the sports activities of the school for many years.”

Scott McKie Brings Plenty is in his seventeenth year of covering sports in Cherokee. In 1998, when he arrived at the One Feather, there was little to no coverage of youth sporting events. His interest in that area lead him to seek permission from the editor to cover school football games. As the years progressed and his reports drew more attention, he would leverage that success to expand coverage of school sports. Reporting everything from wrestling to football, he estimates the count of sports articles written in the “high hundreds” and he has taken over 100,000 photos at Cherokee athletic events.

Family and friends were in attendance as he accepted the award, along with hundreds of game fans. He had this comment on the recognition, “I would like to thank the Cherokee School Board, the faculty and staff of the Cherokee Central Schools, the Eastern Band of Cherokee Indians, and the Cherokee fans for this recognition.  But, most importantly, I would like to thank the hundreds of amazing student-athletes I’ve been able to cover over the years.  It truly has been and is an honor.  I would like to thank my daughter, Maleaha, and my wife, Sheena, for supporting me over the years and never complaining through late night games or even games in the pouring rain or freezing cold.  They are beyond troopers.  Lastly, when honored, in Lakota language, we simply say, ‘Wopila Tanka’.”