BASKETBALL:  Braves top Murphy by 50 points to get 20th win 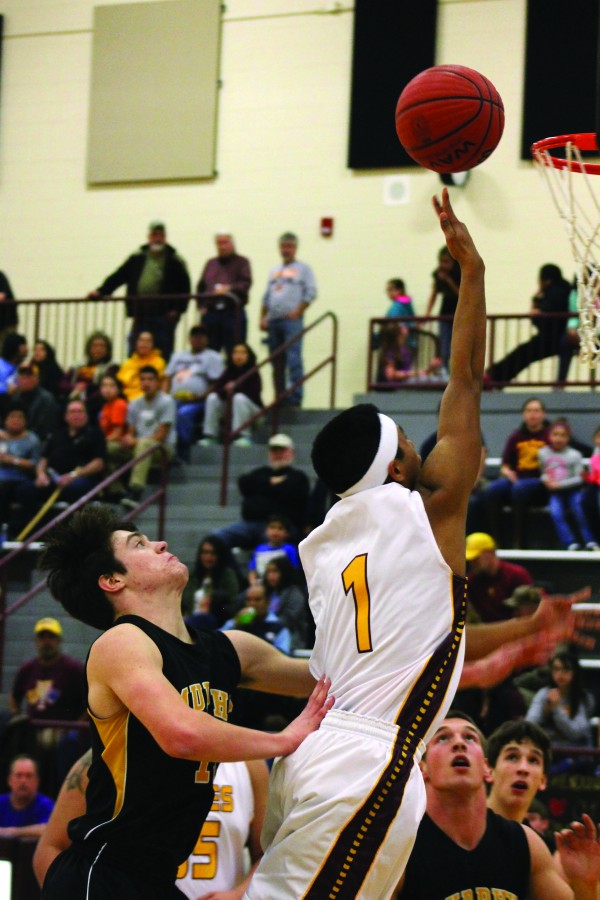 Jason McMillan (#1), Braves forward, skies over Murphy’s Jacob Clark (#15) for a basket during a home game on Tuesday, Feb. 3. McMillan had nine points, four rebounds and six steals on the game as Cherokee won big 101-51 over the Bulldogs.

The Cherokee Braves (20-1) got their 20th win of the season in style as they bested Murphy by 50 points (101-51) at home on Tuesday, Feb. 3.  Dustin Johnson, Braves senior point guard, poured in 30 points to lead Cherokee in a game that saw 14 different Braves players score.

“We played well,” said Braves head coach Willis Tullos.  “From the very beginning of the game to the end we played well.  We had good intensity on our press, and we did a really good job of getting in the passing lanes.”

The game actually started somewhat even with Cherokee taking a modest 4-2 lead two minutes into the first period.  But, that lead widened to 12-4 midway through the period and was extended to a 30-16 lead at the end of the first.

The Braves stifling defense really took effect in the second period, and the Braves outscored Murphy 10-5 in the opening minutes to lead 40-21 at the 5:46 mark.  Not even two minutes later, that lead had extended to 48-21.  Cherokee went on to take a huge 65-23 lead into the locker room.

Due to the large lead, the NCHSAA mercy rule was in application during the second half, and Cherokee was able to get a lot of bench play in this game.  The Braves outscored Murphy 26-14 in the third period to take a 91-37 lead into the fourth.

To view or purchase photos from this game, visit: https://onefeather.smugmug.com/SPORTS/BASKETBALL/BRAVES-BASKETBALL-201415/Vs-Murphy-February-3/