ON THE SIDELINES:  Cherokee fans turn away games into home games

Several weeks ago, I was on the sidelines taking photos of the Cherokee varsity basketball teams who had traveled to Murphy.  In the middle of the first period of the Lady Braves’ game, I took a moment to glance around the gym.  What I saw amazed me – a sea of maroon and gold!

It dawned on me at that point that this wasn’t even an away game for Cherokee.  It was a home game.  The Cherokee fans had absolutely packed the Murphy gym.  Braves supporters filled all of the “away” side and at least one-third of the home side if not a little more. 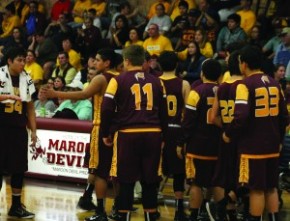 And, it got loud!

I firmly believe that the more a team is supported by its fans, the better the morale of that team is.  Most of the teams who travel to Cherokee do not bring even a percentage of the amount of fans that Cherokee brings to their venues.

In 1996, the Chicago Bulls won the NBA Championship and finished the season with an amazing 72-10 record including an almost hard-to-believe 39-2 record at home.  Granted, that might be an isolated example, but, you see, teams aren’t supposed to lose at home.

Cherokee is changing that paradigm.  With fans coming out to away games with the same fervor as home games, there are essentially no away games for the Braves and Lady Braves.

With the playoffs looming in a few weeks, both of Cherokee’s teams are poised to host at least the first few games.  But, with fan support being what it is, hosting or traveling really isn’t that big of a deal.  Either way, the gym will be filled with screaming fans wearing maroon and gold.

This will be a good weekend for high school basketball as Cherokee travels to Robbinsville on Friday, Feb. 6, and then the Lady Braves host Hiwassee Dam on Saturday, Feb. 7 (JV 5:30pm, Varsity 7pm).  The Hiwassee Dam game, which has been rescheduled several times now, should be especially good as it will pit two of the top 1A teams in the state.