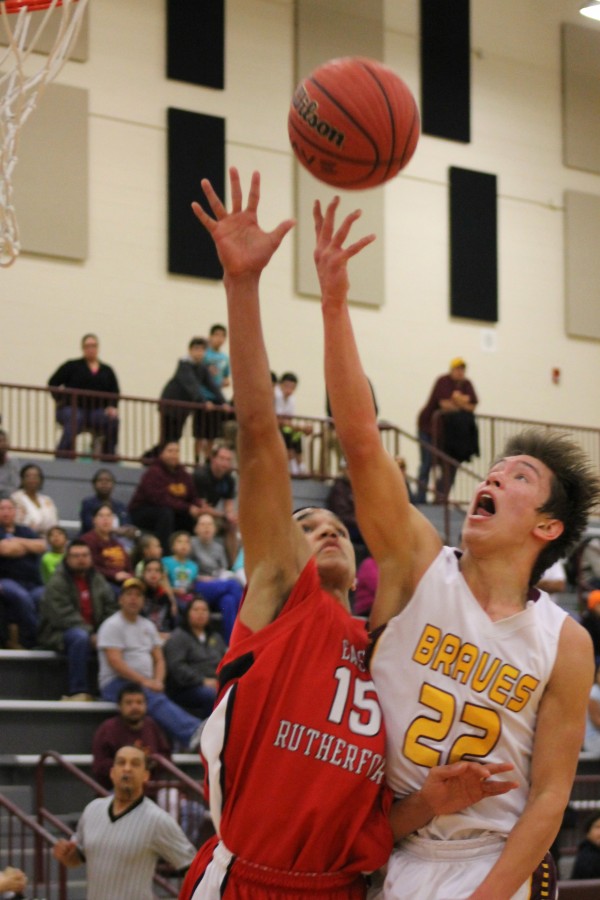 The Cherokee Braves (9-0) won a tough home game against the East Rutherford Cavaliers on Friday, Dec. 26.  Led by Dustin Johnson, Braves senior point guard, who had 28 points on the night, Cherokee stayed unbeaten on the season with a 66-52 victory.

“We played pretty well,” said Willis Tullos, Braves head coach.  “This was a good basketball team.  They’re really quick and really athletic.  That’s the reason we played them when we got the chance.  It was competition that we needed before we go into our conference play.  I was proud with the effort, and I was really proud with the way that we executed especially in the second half.” 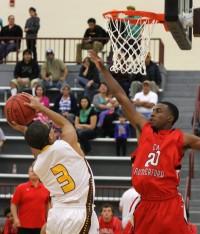 The first half was tight with both teams playing tough defense.  The score went back-and-forth for the first 16 minutes.  The game started with both teams trading baskets.  Then, Johnson hit a three-pointer to put the Braves up 7-4 midway through the first period.  East Rutherford came back with two straight buckets to lead 8-7.  Then, Kennan Panther, who ended the game with eight points, and Eli Littlejohn, who ended with 12 points, both drove the lane and drew fouls on successive plays.  Panther and Littlejohn both hit their free throws and Cherokee led 11-8 with three minutes left in the period.

Johnson was fouled as he made a short jumper and made the subsequent free throw to complete the traditional three-point play to give the Braves a 14-8 lead at the 1:28 mark in the first.  Panther followed that up with a short jump shot to make it 16-8 with just over a minute left in the period.

Both teams would score a few more and Cherokee led 18-12 at the end of the first.

The Cavaliers came out for the third period on fire and ready to play.  Trey Dawkins, East Rutherford center, scored the first six points of the period and East Rutherford took a 31-30 lead early in the third.

But then, a short shot by Johnson and three-point shots by Johnson and Logan Teesateskie, who had seven points in the game, gave Cherokee a 38-33 lead.  The rest of the period went back-and-forth and the Braves managed to take a 44-40 lead into the fourth period.

Coming out of the gates in the final period, Littlejohn hit two shots in the paint to give Cherokee a 48-40 lead which they extended to 51-43 three minutes into the fourth.

The Braves continued to hit shots and free throws and hold the Cavaliers down as they would take the 66-52 victory.

To view and purchase photos from this game, visit https://onefeather.smugmug.com/SPORTS/BASKETBALL/BRAVES-BASKETBALL-201415/Vs-East-Rutherford-December-26/i-tGrHXLj