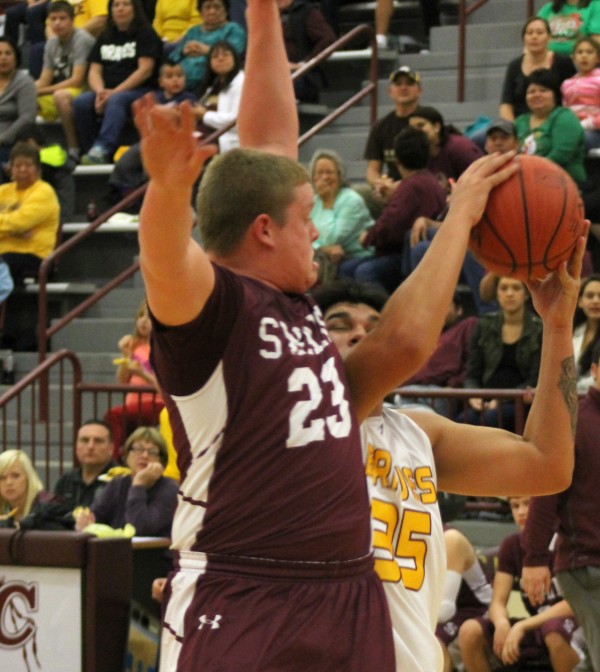 Cherokee’s Eli Littlejohn (#35) takes a hard foul from Swain’s Jake Marr during a home game on Tuesday, Dec. 23. Littlejohn made the shot and the subsequent free throw to complete the traditional three-point play as Cherokee would go on to beat Swain handily 78-38. (SCOTT MCKIE B.P./One Feather photos)

The Cherokee Braves (8-0) kept their unbeaten season intact with a large 78-38 win over Swain at home on Tuesday, Dec. 23.

Eli Littlejohn, Braves center, played a pivotal role in the middle for Cherokee during this game.  Coach Tullos commented on his play, “We didn’t feel they had anyone that could stop him, and we wanted to go to him early and try to get some points.  He did a good job, and the kids did a good job of getting him the ball.” 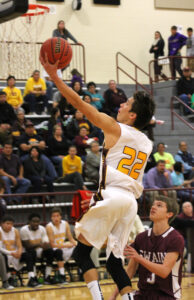 The game started tightly with both teams having troubles shooting early.  After a few minutes in, it was only 3-2 in favor of the Braves.  Midway through the first period, Cherokee managed a 9-4 lead following a traditional three-point play by Littlejohn who was fouled as he made the shot and then, subsequently, made his foul shot.

The Braves led 17-9 after a modest first period by both teams.  Cherokee scored the first five points of the second period to lead 22-9.  Swain opened it up some and outscored the Braves 12-6 in the next few minutes as Cherokee led 28-21 with two minutes left in the half.  Cherokee outscored them 4-1 in the waning minutes of the half to take a 10 point (33-22) lead into the locker room following a monstrous block by Cherokee’s Logan Teesateskie to end the half.

Cherokee began to pull away in the third period and outscored Swain 8-3 in the first few minutes.  They kept up the pressure and led 54-31 at the end of the third.

The Braves came out in the fourth period running on all cylinders and scored the first 16 points.  They led 70-31 midway through the period, and in fact, Swain didn’t score a point in the final period until the 4:18 mark which allowed Cherokee to take the big 40 point win.

Individual stats were not available for this game.

To view and purchase photos from this game, visit https://onefeather.smugmug.com/SPORTS/BASKETBALL/BRAVES-BASKETBALL-201415/Vs-Swain-December-23/