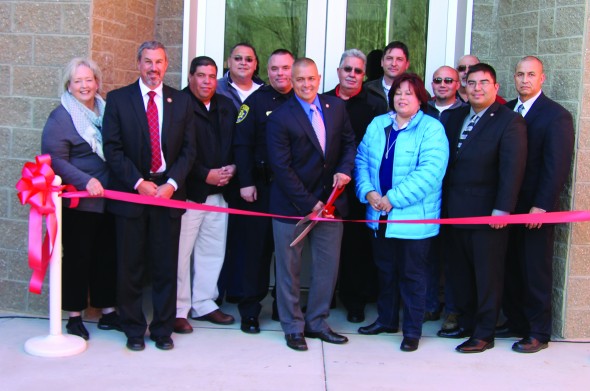 ONE FEATHER STAFF
A ribbon was cut on Wednesday, Dec. 17 by tribal officials to open a building and complete a project that was eight years in the making.  The new 76,000 square feet EBCI Justice Center was officially opened in front of a crowd of over 200 people.

Prior to giving the opening prayer for the event, Vice Chief Larry Blythe gave some remarks on the idea of justice, “Christian justice has no place for vengeance, self-righteousness or getting even.  That’s hard to do.  Instead, justice requires us to seek the good of others, even those who have wronged us.”

The Justice Center has been built on a 14-acre tract off of Oliver Smith Road and will house the Cherokee Tribal Court and offices, a 96-bed jail, and the Cherokee Police Department.  The total project cost $26 million with $18 million coming from a Department of Justice grant and the rest coming from the Eastern Band of Cherokee Indians. 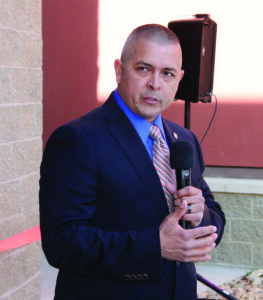 He said the new facility will add much to the rehabilitation of inmates.  “We control the mental health aspect.  We control the alcohol abuse aspect – all of those other things that are harming the children of this community and creating havoc for the future of who we are as a people and who we are as a region.”

Chief Hicks concluded by saying, “Our job is to try to change it for the future generations.”

Tribal Council Chairperson Terri Henry said, “I want to thank everyone who had a hand in designing, building, or conceiving this entire concept.”

She praised the coordination between the Cherokee Tribal Court and the Cherokee Indian Police Department and said that coordination will only improve with the new facility.  “I want to thank our justice providers.  Thank you very much for all of the work that you all do.”

Jason Lambert, EBCI Commerce Division director, commented, “We wanted to look at a comprehensive approach to justice.  We wanted to make sure that we weren’t just putting people in jail or having people come through our courtroom, but that we were re-introducing them and helping them to become productive members of our Tribe and our community.”

He thanked the three project managers who have worked on the project including Brandon Stephens, Travis Smith and current project manager Damon Lambert, EBCI economic and community development manager, who noted, “I was hired by the Tribe in 2006, and one of my first tasks was to do a master plan for a justice center.  I think this is a great day.  It’s been a long time coming.”

Cherokee Chief of Police Ben Reed commented, “It’s a huge challenge, but I’m confident that we have the facility and the staff to take this on for our community.  The jail affords us opportunities that we never had before.”

He said they plan to run a “firm, strict” jail, but they also want to utilize all resources to offer people the help the support they need to become productive citizens.  “We want to do our part to reduce recidivism.  We want people to come out of jail and be productive.”

Cherokee Chief Justice Bill Boyum said the project has been a challenge, but everyone persevered and kept working hard.  “It’s been a long journey.  We’ve done many things to help protect the citizens of the Qualla Boundary.”

All of the construction and site work for the Justice Center was done by Flintco.