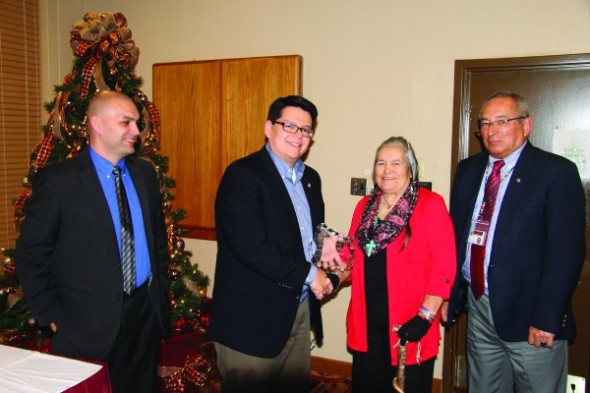 Known as a tough teacher and, more importantly, a person who had great positive influence over generations of Cherokee children, this year’s recipient of the Frell Owl Award spent a lifetime instructing others on school subjects and life.

Catherine Blythe Sanders, 97, was recognized with the award at the 28th Annual Frell Owl Award Presentation held Wednesday, Dec. 11 at the Chestnut Tree Inn.  Due to her advanced age and the fact that she resides in south Georgia, she was unable to attend the event, but two of her children, Wren Peterson and Butch Sanders, accepted on her behalf.

Sanders was the first American Indian teacher on the Cherokee Indian Reservation and served as a teacher for over 30 years.

Blankenship commented, “Former students said, ‘she’s the meanest teacher I’ve ever had, but the one that taught me the most book learning, moral values and respect for others.’”

Peterson said her mother is doing well.  “I told her last night that she was won this award and she recognized the fact that it was quite prestigious, and she was very happy to have been able to be the winner.”

“Many of you had her as fifth graders,” said Peterson.  “In fact, I don’t know of anybody on the reservation who was in the fifth grade who didn’t have her because she taught in Snowbird and Big Cove and she even taught my brother and sister and they had to call her Ms. Sanders at school.”

Peterson said her mother “is very proud of being known as the meanest teacher”.

“I think she is very deserving of this, and I’m happy to accept the award on her behalf.”

Principal Chief Michell Hicks, “Congratulations to all of those who were nominated for this award here today.  It is one of the most prestigious awards offered here in Cherokee.  I have known Ms. Sanders for a long time, and I’ve always enjoyed our conversations.”

He went on to say, “There were times when she fussed at me a bit, but it was always for the right reasons, and I think the teacher did come out in her.”

Dr. Scott Penland, Cherokee Central Schools superintendent, commented, “I didn’t know Ms. Sanders, but I can promise you I’d like to have about 50 of her today in our school system.  That’s the kind of teacher I like.  I like them all, but I really want the ones that are tough.”

McCoy noted, “We are very proud of everyone here today and are thankful for what you’ve done for the community.”