CULLOWHEE – Western Carolina University honored its fall and summer graduates during a Saturday, Dec. 13 commencement ceremony that went on as planned after a bomb threat necessitated the relocation of the event from Ramsey Regional Activity Center to E.J. Whitmire Stadium.

WCU’s fall class includes about 800 students who recently have been completing academic requirements to receive their degrees, and approximately 530 of those students took part in WCU’s commencement. Another group of about 100 graduates who completed degree requirements during summer school and who already have been conferred degrees also joined in the ceremony.

Commencement activities included an address delivered by graduating student Jill Haley West White, a resident of Andrews and secondary English education major at WCU. White related that her speech was inspired by Maya Angelou’s book “I Know Why the Caged Bird Sings,” and she spoke to the graduating students and new alumni about the late writer’s life and what Angelou wrote about courage.

White said she has not always demonstrated courage in her life.

“Some of you may be able to relate,” she said. “It is easy to stand in the back corners of life and dream second-rate dreams – the kind that are safety nets, easier to achieve than the true dreams in our hearts. Honestly, none of that changed for me until I moved to Cullowhee and became a student at WCU. I’m guessing Western has made quite an impact on your lives, too.” 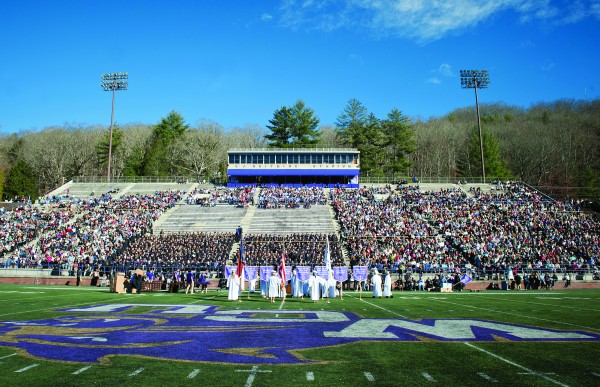 Family members and friends of the graduates filled the stadium’s east stands during WCU’s commencement on Saturday, Dec. 13. (WCU photo)

In her writing, Angelou indicated that an individual must have courage first to be able to consistently practice the virtues of kindness, mercy, generosity and honesty, White said. “It took all of those values to bring us to this point today, and anything worth doing in life will require them of us from this day forward,” she said. “Because challenge is one of the inevitable things in life, I ask this of you. The next time you are faced with an obstacle, have courage. It will help you achieve goals you might have been scared to dream before you came to Western Carolina University.

“Whatever you accomplish after we turn our tassels today, I hope it is something to write home about – and by ‘home,’ I mean Cullowhee.”

White graduated from Andrews High School in 2010 and began her studies at WCU that fall. On campus, she is a dean’s list student and is enrolled in the Teaching Fellows Program. She has represented WCU at academic conferences including the National Conference on Undergraduate Research and the annual convention of the National Council of Teachers of English.

White has been fulfilling her student teaching requirement this fall at Nantahala School in Macon County. She hopes to begin her career as a high school English teacher in Western North Carolina.

At the conclusion of her speech, White was recognized for achieving the distinction of “University Scholar,” a student who has completed undergraduate studies at WCU with perfect 4.0 grade-point average.

Activities during the ceremony included special recognition for graduating student Taylor Madison Boyd of Waynesville, who is the great-great granddaughter of WCU’s founder and first president, Robert Lee Madison. Coincidentally, WCU has been celebrating the 125th anniversary of its founding this year.

Recognition also was given to all those wearing caps and gowns who are active duty members of the military, veterans, or members of the National Guard and Reserves. Those students were distinguished by red, white and blue honor cords.

Also honored during the ceremony was Robert Edwards, WCU’s retiring vice chancellor for administration and finance. Edwards graduated from WCU in 1977 with a bachelor’s degree in business administration and is completing a 37-year career at the university. WCU Chancellor David O. Belcher noted Edwards’ long record of service and dedication to the university, calling him a “paramount Catamount.”

Belcher presided over commencement and delivered the charge to the fall semester degree candidates and summer graduates. In his charge, Belcher told the graduating students and new alumni that regardless of whether they have their futures mapped out, or they are uncertain what is coming next, they have the minds and skills to chart their own courses in life.

“As you look toward your future, I charge you to hold tight to your grounding at Western Carolina University and the values for which this institution stands, to remain firm in your commitment to excellence and high standards, and to continue learning, whether in formal settings or on your own,” Belcher said.

Later, at the conclusion of the ceremony, Belcher thanked members of the WCU staff and faculty for the “extraordinary effort” they put forth to move the event to the football stadium. “I have never been prouder to be a Catamount than I am today,” he said.

A complete list of WCU’s new graduates will be announced following the posting of grades from final examinations.